Does Christmas have pagan roots?

The following is an extract from the Encyclopedia Britannica:[1]

In ancient Rome, December 25 was a celebration of the Unconquered Sun, marking the return of longer days. It followed Saturnalia, a festival where people feasted and exchanged gifts. The church in Rome began celebrating Christmas on December 25 in the 4th century during the reign of Constantine, the first Christian emperor, possibly to weaken pagan traditions.

Now the Encyclopedia Britannica is a trusted authority on all matters that it covers; it can be relied upon to give correct information, so what it states must be correct. Right? 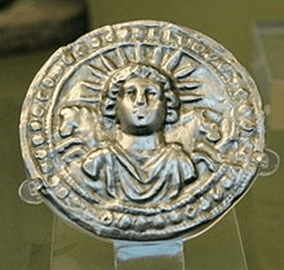 The birthday of the unconquered sun was celebrated at the Roman festival of Dies Natalis Solis Invicti on December 25. It commemorated the sun’s victory over darkness, and it was celebrated on the darkest day of the year, the winter solstice.

Roman Emperor Aurelian (AD 214-275) instituted the feast no earlier than AD 274. However, there is no clear evidence that this date was celebrated until AD 354.[2]

The image is of the Roman Imperial repoussé silver disc of Sol Invictus, found at Pessinus (British Museum).

Early Christians at this time, were being persecuted, fed to the lions, tied to stakes covered in pitch (tar) and set alight, for their faith. There is no way such faithful believers would choose the date of a pagan festival to celebrate the birth of their Lord. 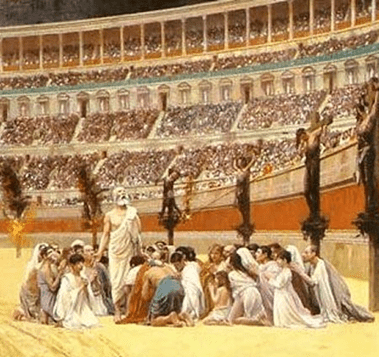 Nero fastened the guilt and inflicted the most exquisite tortures on a class hated for their abominations, called Christians by the populace. Christus, from whom the name had its origin, suffered the extreme penalty during the reign of Tiberius at the hands of one of our procurators, Pontius Pilatus, and a most mischievous superstition, thus checked for the moment, again broke out not only in Judea, the first source of the evil, but even in Rome, where all things hideous and shameful from every part of the world find their center and become popular. Accordingly, an arrest was first made of all who pleaded guilty; then, upon their information, an immense multitude was convicted, not so much of the crime of firing the city, as of hatred against mankind. Mockery of every sort was added to their deaths. Covered with the skins of beasts, they were torn by dogs and perished, or were nailed to crosses, or were doomed to the flames and burnt, to serve as a nightly illumination, when daylight had expired.

The Christian Martyrs’ Last Prayer is a painting by the French painter Jean-Léon Gérôme, which he painted in 1883. It displays vividly, Christians having been covered with pitch, were then set alight to the delight of the Colosseum crowd. Part of his large painting is shown here.

The early Christians had a problem.

After Jesus’ resurrection and ascension, the church spread rapidly. Acts 2:41 records 3,000 new believers being baptised in one day, and that the disciples travelled widely in obedience to Jesus’ command to go and make disciples of all nations (Matthew 28:16). They wanted to celebrate their Saviour’s birth, but they did not know the exact date. A modern-day example is the celebration of the British monarch’s birthday in all Commonwealth countries.

Luke wrote his gospel between AD 59 to 63.[3] He was commissioned by his friend Theophilus (Luke 1:1-4, Acts 1:1-2) to investigate so he could give an account of the things that have been fulfilled among us. He was not able to state exactly, Jesus’ age when He commenced His ministry. Luke’s exactness has characterised his writings so the fact that he could not state Jesus’ age was not due to any sloppiness, but confirms the fact that he did not know. He could only say that He was about 30 (Luke 3:23) when He commenced His ministry, which. he could have deduced this from the fact that Levites start their service at the age of 30 (Numbers 4:3). However, he does state what he knew was the approximate time of Jesus’ birth by recording:

In those days Caesar Augustus (31 BC-AD 14) issued a decree that a census should be taken of the entire Roman world. (This was the first census that took place while Quirinius was governor of Syria.). This decree led Joseph and Mary to travel to Bethlehem, Joseph’s ancestral home, and while there, Jesus was born.

Clearly, Christians wanted to know a day when they could celebrate their Lord’s birth, so they may have used the Jewish idea of the Integral Age Theory; which is the idea that prophets and other holy men, would have a ‘perfect lifespan’, an exact number of years from conception to death. The Jewish book called the Talmud applies this to Moses and Abraham. But it appears that early Christians applied this to Jesus. Now they knew that Jesus died at Passover (1 Corinthians 5:7), in fact, He was the Passover Lamb (John 1:29), and the time of Passover varies from year to year because there must be a full moon and the moon’s orbit about the earth is not in synchrony with the earth’s orbit about the sun. According to the Integral Age Theory, Jesus must have been conceived on the same day. Passover being late March to early April, so they reasoned that Jesus must have been born nine months later, which places His birth at late December to early January.

The reason early Christians chose December 25 could have been because they believed that important human events were in synchrony with celestial events, so if Jesus was born around the end of December, it must have been the winter solstice which they wrongly thought was December 25 using the Roman calendar.[4] However, some chose January 6, and this date is celebrated by the Eastern Orthodox church. The pagan derivation theory expressed in the Britannica quote cannot explain why the Eastern part of the early church chose January 6 when no pagan festivals fell on that day. But the Integral Age Theory explains both dates.

The leading church father Augustine (AD 354-430) explicitly taught this Integral Age concept and implied that it was old news even in his time.

For He is believed to have been conceived on the 25th of March, upon which day also He suffered; so the womb of the Virgin, in which He was conceived, where no one of mortals was begotten, corresponds to the new grave in which He was buried, wherein was never man laid, neither before nor since. But He was born, according to tradition, upon December the 25th[5]

The feast of the Annunciation

The feast of the Annunciation[6] is celebrated by the Roman Catholic Church today, its history goes back to Julius Sextus Africanus (AD 160-240). He completed an elaborate chronology of the creation of the world, based on the Hebrew Scriptures and the New Testament, up until AD 221. In these calculations he concluded that the first day of creation happened March 22 and both Jesus’ annunciation and resurrection happened on March 25. Nine months from Jesus’ conception takes us to December 25.[7]

Further, the Feast of the Annunciation is celebrated on March 25. The Catholic Encyclopaedia provides a reason for this date: All Christian antiquity (against all astronomical possibility) recognized the 25th of March as the actual day of Our Lord’s death. The opinion that the Incarnation also took place on that date is found in the pseudo-Cyprianic work “De Pascha Computus”, c. 240. It argues that the coming of Our Lord and His death must have coincided with the creation and fall of Adam. And since the world was created in spring, the Saviour was also conceived and died shortly after the equinox of spring…the ancient martyrologies assign to the 25th of March the creation of Adam and the crucifixion of Our Lord; also, the fall of Lucifer, the passing of Israel through the Red Sea and the immolation of Isaac.

For whatever the reasons, it is clear that the early church celebrated Jesus’ conception (Annunciation) on March 25, as evidence by Julius Africanus before 221 and The Catholic Encyclopaedia in 240. The later date being over 30 years before the proclamation of Solus Invictus. And hence, His birth on December 25. 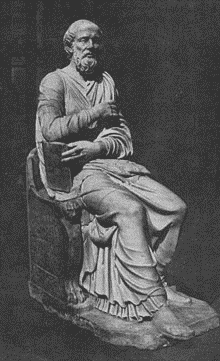 Hippolytus was a presbyter in the church at Rome at about AD 200. It is he who started the genre of literature we know as biblical commentaries and his Commentary on Daniel is the oldest surviving Christian commentary on Scripture. Hippolytus seems to have undertaken this work to comfort his fellow Christians, who, like Daniel and his three companions, suffered for their faith. For Hippolytus, suffering was not something to fear, but something to be gladly embraced. In this commentary, he implores Shadrach, Meshach, and Abednego, “Tell me, you three boys, remember me, I entreat you, that I also may obtain the same lot of martyrdom with you.” His request was fulfilled; Hippolytus suffered martyrdom in AD 235 after being exiled to Sardinia.[8]

The image is of a statue of Hippolytus which stands in the Vatican library.

In this book written in AD 202, which is one of his ten books, he makes the following statement:

For the first advent of our Lord in the flesh, when he was born in Bethlehem, eight days before the kalends of January[9] [December 25th], the 4th day of the week [Wednesday], while Augustus was in his forty-second year, [2 or 3 BC] but from Adam five thousand and five hundred years. He suffered in the thirty third year, 8 days before the kalends of April [March 25th], the Day of Preparation, the fifteenth year of Tiberius Caesar [AD 29 or 30], while Rufus and Roubellion and Gaius Caesar, for the 4th time, and Gaius Cestius Saturninus were consuls.

Hippolytus confirms that very early Christians believed rightly or wrongly, that Jesus was born on December 25, and this was happening in 202.

It is unlikely that Jesus was born on December 25, but the information given above shows that early Christians were celebrating His birth on that date, at least as early as AD 202 and the pagan celebration of Solus Invictus and the holiday associated with it, was not announced until AD 274 and it may not have taken place until 354.

Christmas is thoroughly Christian and separate from Roman sun worship.

[1] https://www.britannica.com/question/Does-Christmas-have-pagan-roots. [2] T C Schmidt, Biblical Archaeology Review, Winter 48 (4), 2022, pages 50-54. [3] Introduction to Luke’s gospel, New International Version of the Bible, The Zondervan Corporation, 1985, page 1532. [4] The solstice, according to the Julian calendar, was December 25. Then in the 4th century with calendar corrections it was December 23. In the 16th century Gregorian calendar, it was changed to December 21. [5] Augustine, On the Trinity 4:5, Tr. Arthur West Haddan, Nicene and Post-Nicene Fathers, First Series, Vol. 3, ed. Philip Schaff, 1887; newadvent.org. Cited by Jonathan Sarfati, https://creation.com/celebrating-christmas. [6] The day the angel Gabriel announced to Mary her conception. [7] Marianne Widmalm, The Times of Israel, January 6, 2020. https://blogs.timesofisrael.com/25th-of-december-a-christian-or-pagan-holiday. [8] T.C. Schmidt, Hippolytus of Rome: Commentary on Daniel, 2010. [9] The Kalends of January was a Roman festival celebrated in Gaul at the beginning of a new year. The Gauls honoured their gods and goddesses with feasting, dancing, and processions. Initially, it was celebrated on January1, but transferred to January 3 early on.