Gay Marriage? What the Bible says about Homosexuality

Social Comment 2, Gay Marriage? What the Bible says about Homosexuality

Homosexuality, the practice and thought is condemned by God as it is a violation of His original creation: one man and one woman united in the bond of marriage for procreation for life (Genesis 2:23-24), which He declared to be; very good (Genesis 1:27-31). 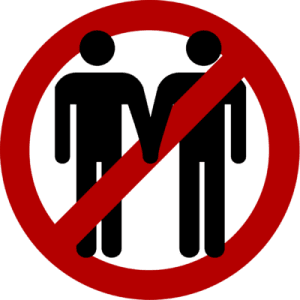 Genesis 18:16-19:29 gives the account of the Lord’s destruction of Sodom and Gomorrah because the outcry against Sodom and Gomorrah was so great and their sin so grievous (Genesis 18:20) and that their sin was one of homosexuality is shown by the fact that when two men (angels) visited Abraham’s nephew Lot, who lived in Sodom with his wife and two daughters; all of the men from every part of the city of Sodom both young and old surrounded the house (Genesis 19:4-5) so that they could pack-rape Lot’s two male visitors. As a consequence, God destroyed both cities and the practice of homosexuality has become known as sodomy.

Leviticus 18:22 You shall not lie with a male as with a woman; it is an abomination.

Leviticus 20:13 If a man lies with a male as with a woman, both of them have committed an abomination; they shall surely be put to death; their blood is upon them.

Paul writing to the Romans under the influence of God’s Holy Spirit states that people are without excuse for not believing in the Creator God because the whole created world reveals Him so clearly that they are without excuse (Romans 1:20). Since they have rejected God, His wrath is to abandon them to their sins. Of the 20 plus sins listed (Romans 1:26-32); homosexuality is the first: Because of this, God gave them over to shameful lusts. Even their women exchanged natural sexual relations for unnatural ones. In the same way the men also abandoned natural relations with women and were inflamed with lust for one another. Men committed shameful acts with other men, and received in themselves the due penalty for their perversion.

Do you not know that the wicked will not inherit the kingdom of God? Do not be deceived: Neither the sexually immoral nor idolaters nor adulterers nor male prostitutes nor homosexual offenders nor thieves nor the greedy nor drunkards nor slanderers nor swindlers will inherit the kingdom of God. And that is what some of you were. But you were washed, you were sanctified, you were justified in the name of the Lord Jesus Christ and by the Spirit of our God.

Please note verse 11; all of these ongoing practices are an offense to God and would prevent the offender from inheriting the kingdom of God. But since such people have desisted from these practices and have been justified through their belief/faith in Christ they now can enter the kingdom of God.

Understanding this, that the law is not laid down for the just but for the lawless and disobedient, for the ungodly and sinners, for the unholy and profane, for those who strike their fathers and mothers, for murderers, the sexually immoral, men who practice homosexuality, enslavers, liars, perjurers, and whatever else is contrary to sound doctrine.

Please Note, for those people who want to be released from the enslavement of homosexuality, there is hope: There is no sin so great that Jesus cannot forgive, because He has already paid the penalty with His sacrificial death on the cross. Through faith in Him and seeking his help, he will provide the means for you to break free. There are also, people who are willing to help you see: