The Bible states that all of the mountains were covered with water. This being the case, evidence may 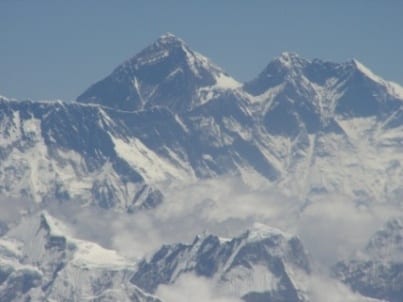 exist to support this fact. There is enough water in the oceans so that, if all the surface features of the earth were evened out, water would cover the earth to a depth of 2.7 kilometers.

Major mountain ranges are formed by the collision of continental shelves and many are still rising. For example, if Sir Edmond Hillary were to climb Mt Everest today, he would have to climb an extra meter and a half.

Interestingly, marine fossils are found at high altitudes, including Mt Everest and on all five continents. 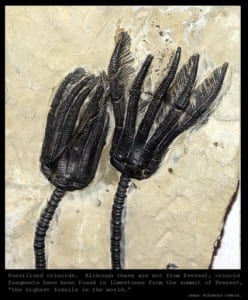 Crinoid fossils and other marine fossils have been found on top of almost every mountain range on earth. In fact, crinoid fossils have even been found at the summit of Mount Everest, the highest point on earth. In his book Geology of the Himalayas (Interscience Publishers, 1964, page 164) Professor Augusto Gansser refers to the rock specimens brought back from the summit of Mount Everest by the successful Swiss climbers in 1956, and also by the American team in 1963. Gansser continues: Of special interest is the fact that both samples contain crinoidal fragments. Their large uniform calcite crystals contrast with the otherwise much finer crystalline matrix. In one elongated stem-fragment the segmentation is visible, while one small plate still shows the well-preserved perforation. Moreover, he observes: These remnants, represent the highest fossils in the world.

The image above is of crinoid fossils, although these are not from Mount Everest.

There are many big ammonite fossils in the Muktinath area of the Kali Gandaki Valley, Nepal, at around the elevation of 4,000 meters above sea level. This is another of the proofs that the Himalayas were indeed once under water. 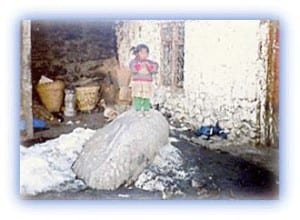 For many people who have faith in the Hindu religion, ammonite is one of the many forms of their Lord
Vishnu. They keep ammonite fossils in their worship room and worship them. The photograph shows a Nepalese girl standing on a large ammonite fossil.

The New York Times March 12, 1987, reported that scientists have found fossils of whales and other marine animals in mountain sediments high in the Andes, indicating that the South American mountain chain rose very rapidly from the sea.

The Andes in South America have so many marine fossils that tour companies are now offering fossil hunting as part of their programs. One example follows: http://www.scientificamerican.com/article/fossil-hunting-in-chile/

There can be no doubt that at one time the whole world was covered by water, which is consistent with Noah’s Flood as stated in the Bible.