The Samaria Ostracon and the Amulet Scrolls

Joseph, who was Jacob’s favorite son because he was born to Rachel, was sold to a group of travelling Midianites by his jealous brothers. They took him to Egypt and sold him as a slave (Genesis 37). The hand of God was on Joseph and through a series of events he became Egypt’s Prime Minister and second only to Pharaoh. There, he married Aseneth and she bore him two sons; Manasseh and Ephraim (Genesis 39-41). About 470 years later their descendants had grown into the two tribes of Manasseh and Ephraim which were part of the Twelve Tribes of Israel and were about to take possession of the land which God had promised to Abraham, Isaac and Jacob and had become known as the Promised Land. Genesis chapter 17 verses 2-3 records the land the descendants of Manasseh will possess as Joshua tells Manasseh’s descendants their allotments. 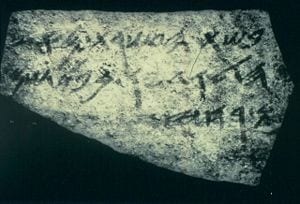 inscriptions written in ink. The potsherds were found in the remains of the treasury of the palace of Ahab in ancient Samaria. Ahab was king of Israel (Northern Kingdom). The potsherds are called ostraca (plural) and ostracon (singular); an image of one is shown on the right. The inscriptions are in ancient Hebrew writing and are commercial records (letters, receipts, accounts etc) of the time. Thirty of them identify the clan/district name of 7 of the 10 offspring of Manasseh recorded in Joshua 17:2-3 and Numbers 26:28-33. Each of the five sons of verse 2 are identified;  Abiezer (1 ostracon), Asriel (2 ostraca), Helek (6 ostraca), Shechem (1 ostracon), and Shemida (17 ostraca). Two of the daughters of Zelophehad the son of Hepher (verse 3) are identified; Hoglah (2 ostraca) and Noah (1 ostracon).

These ostraca appear to be the oldest biblical archaeological discoveries and provide compelling evidence for this aspect of Israel’s early tribal history.

The oldest passage of scripture currently known was found written on two tiny scraps of silver foil, as 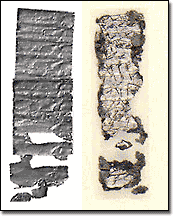 shown. Each was rolled up and possibly worn around someone’s neck, and was buried with the person. They were found by Dr Gabriel Barkay during the excavation of burial caves in the Shoulder of Hinnom area in 1979 and can be seen today in the Israel Museum in Jerusalem. Each contains an inscription of the Aaronic Blessing, also known as the Priestly Blessing, of Numbers 6:24–26:

These two silver scrolls dated from the late seventh century BC, are extremely important in countering claims made by liberal scholars that the Old Testament was written during the Babylonian exile[2], one of which being the JEDP Documentary Hypothesis, in order to create a nationalistic history for those returning from Babylon. The amulet scrolls clearly show the Old Testament being used before, not after, the exile. They disproved decades of liberal biblical assertions in one small discovery.

For more information regarding these scrolls go to: www.biblearchaeology.org/post/2010/01/06/The-Blessing-of-the-Silver-Scrolls.aspx#Article.

[1] P. Masters, Heritage of Evidence in the British Museum, Stephens and George, 2004.