After Saul died, David became king (1010 BC), he united Israel and his capital was at Hebron. Jerusalem was a Canaanite city occupied by the Jebusites and David desired to have it for his seat of power. However, it was built on a limestone outcrop with walls on top of steep canyons thereby making it well fortified and almost impossible to capture. Most cities were built next to rivers so the people had plenty of water available to them, but Jerusalem was different, the inhabitants had access to a plentiful supply of fresh water from the Gihon Spring which  was accessed via a shaft that reached down to the spring. The water would be of great value if the city came under siege since the access was from within the city walls.

When David’s army reached Jerusalem, the Jebusites were so confident that the city would not fall, they taunted David by saying that even the blind and the lame could defend the city. Apparently David knew about the water shaft, so he said to his men that the only way to conquer the Jebusites will be via the water shaft and he will make the man who is able to enter the city, the commander of his army.[2] We then read that it was Joab the son of Zeruiah who claimed this honor.[3]

In 1887, the British engineer, Captain Charles Warren discovered a shaft that now bears his name which 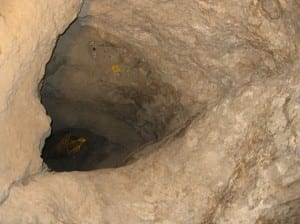 runs from within the old city to a spot near the Gihon Spring which is pictured. The narrow and tall shaft was demonstrated to be accessible when a member of Warren’s team climbed from the top to the base. It has been long thought that this is the water shaft that Joab scaled to launch his surprise attack on the city. In 1998, while a visitor center was being constructed, builders discovered that there was an additional passageway, about two meters higher and starting from the horizontal curved tunnel that skirted the 14 metre vertical shaft, and continued to the pool much nearer to the Gihon Spring.

In 2005, archeologists discovered the ruins of walls that would have protected the overland path to the spring prior to the tunnel’s construction. Further evidence for this being the original water shaft that Joab climbed comes from the discovery of ceramics which date to the 18th century BC.[4]

The schematic is provided courtesy of Generat

As a footnote; under the direction of The Israel Ministry of Foreign Affairs, Jerusalem celebrated the 3,000th anniversary of David’s conquest and occupation of Jerusalem in 1996.