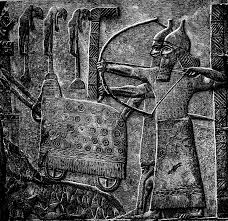 hoboam replaced his father Solomon as king of Israel. He increased taxes on the people so that he and his friends could have a luxurious lifestyle and this caused the kingdom to split. Ten tribes followed Jeroboam north and he led the people into idolatry from which they never returned to the worship of Jehovah.[1] All of the kings of the Northern Kingdom, also called Samaria or Israel, were bad and God put an end to them when the Assyrians took them into captivity in 722 BC. They did leave some of the inhabitants and the Assyrians blended other peoples with them hence the Jews never liked the Samaritans as evidenced by Jesus’ parable of The Good Samaritan.

The two remaining tribes, Judah and Benjamin (Judah being much larger, took the name of the southern kingdom and this is where the name Jew came from for these people) had a mixture of both good and bad kings. A good one was Hezekiah who commenced his reign in 716 BC at the time of Isaiah and at the time when Assyria was still a powerful force and still destroying and plundering cities. In fact when the Assyrian king Sennacherib threatened Jerusalem, Hezekiah commissioned the construction of a tunnel to carry water from the Gehon Spring which was outside the city wall to inside the city to the Pool of Siloam and blocked off external access to it.[2] The tunnel was constructed between the period 727 BC and 698 BC with teams of men starting from each end and meeting in the centre even though they plotted a zig zag course. 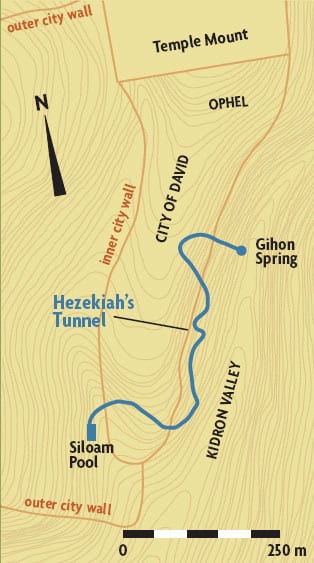 The tunnel was discovered by Edward Robinson, an American Bible scholar, 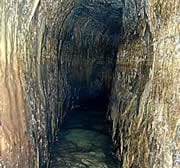 in 1838. It is still carrying water and people can walk along all of its 533 meters and exit at the Pool of Siloam (more about this in a later blog). The photograph right is of Hezekiah’s Tunnel and is presented by courtesy of BiblePlaces.com.

Hezekiah may not have needed to build the tunnel because as recorded in the book of Isaiah, chapters 36 and 37 which give an account of the events of 701 BC, where the all-conquering Assyrian king Sennacherib, having laid waste to the walled cities of Samaria and Judea, now lays siege to Jerusalem.

He sends a list of demands to the godly king Hezekiah, which state, in effect: what makes you think that your God can save you when the gods of all of the surrounding people could not save them?[3] In great fear and anguish, Hezekiah goes into the temple, lays the letter before the Lord and prays for deliverance because this tyrant has blasphemed the name of the true God. In the morning Hezekiah’s prayer is 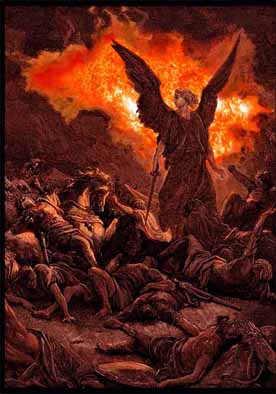 answered as 185,000 Assyrian soldiers lie dead. Sennacherib then packs up and goes back to Assyria where he is murdered by his sons while praying to his god.[4] This event is confirmed outside of scripture by the Greek historian Herodotus who refers to it in his manuscript; Histories which he wrote in approximately 450 BC[5] and is also alluded to by Sennacherib himself, who had recorded on the Taylor Prism (see a later blog) that he, had captured 46 cities but not Hezekiah’s Jerusalem where he settled for booty instead.