There are three men of significance named James in the New Testament; James the son of Zebedee,[1] one of the twelve, James the son of Alphaeus[2] who was also a disciple of Jesus and James the brother of Jesus[3] who was actually a half-brother because Jesus was conceived by the Holy Spirit. It is this last James who became the leader of the early church[4] and who wrote the letter which bears his name. He changed from unbelief to belief on the resurrection of Jesus. Tradition tells us that he was a man of great virtue and was called “James the Just” and that he had hard skin on his knees like a camel because he spent so much time in prayer.[5] Josephus records that some time before the destruction of Jerusalem in AD 70, the Pharisees had him murdered by having him thrown down from the temple, stoned and then beaten with a club. All for being a faithful witnessed to his Savior.[6] This occurred in about AD 62.[7] 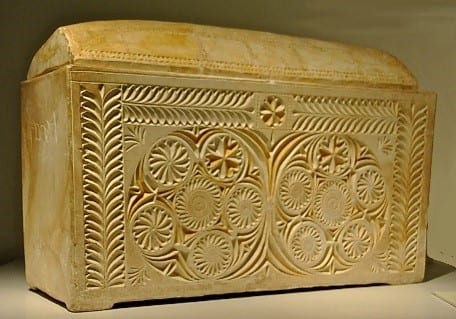 It was Jewish practice to place the dead on a chiseled out rock bench in a tomb prepared by hollowing out the limestone rock which surrounds Jerusalem, to make a cave. After a period of time, normally about 12 months, when the interned body had decomposed, the bones were collected and placed in a limestone receptacle called an ossuary. This made storage easier and freed up the shelf for the next body. The richly decorated ossuary of the High Priest Caiaphas (see image) who presided over the trial of Jesus[8] was discovered in 1990. 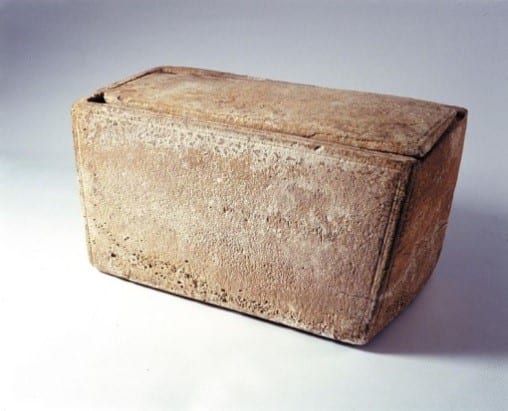 The existence of an ossuary was announced on October 21, 2002, see image right. What made this artifact so different from the over 10,000 that have been found, is that it contained the inscription written in ancient Aramaic; James, son of Joseph, brother of Jesus. The inscription names the deceased’s brother which was very unusual. The most likely reason to include a brother’s name is if his brother was of great importance.

The inscription, shown below, had been declared a forgery by the Israeli Antiquity Authority (IAA) and they charged its owner; Oden Golen with forgery. After a five-year trial, Judge Aharon Farkash acquitted the accused of all forgery charges, ruling that the prosecution could

not show beyond reasonable doubt that the inscription was forged.[9] The IAA’s main reason for declaring the ossuary a forgery was that Joe Zias, an anthropologist formerly employed by the IAA said that he saw the receptacle in an antique shop without the “brother of Jesus” inscription. He later admitted that he could not read Aramaic and that he was looking at another ossuary.[10]

Several points have emerged which leave no doubt of the ossuary’s authenticity:

Professor Camil Fuchs of Tel Aviv University produced a statistical analysis of the occurrence of these three names in ancient Jerusalem and declared that there were 1.71 people named James, with a father named Joseph and a brother named Jesus, living in Jerusalem around the time at which the ossuary was produced. Professor Fuchs says he can state with 95 per cent assurance that it is a statistically accurate conclusion.[17] Of course, when the fact that James had a notable brother which was the reason for His name being included, then the chances are very great that it was the ossuary of James the half-brother of Jesus, whose bones were once in there.

After the most intense interdisciplinary scrutiny by experts in their fields, brought about by the IAA’s declaration that it is a forgery, the James Ossuary can now be considered to be authentic. It provides the earliest direct link to Jesus and His family and of course, further evidence for the truth and accuracy of the Bible.