Previous Post
Sally Jane
Next Post
If God is all powerful and loving, how come there is so much suffering in the world?

The Pool of Siloam

The Pool of Siloam was built by King Hezekiah (he reigned from 715- 686 BC) and it is mentioned three times in the Bible; Nehemiah 3:15, Isaiah 8:6 and John 9:6-7. The Hebrew word Siloam means “sent.” John’s gospel records Jesus healing the blind man by rubbing mud in his eyes and telling him to wash his eyes in the Pool of Siloam, which he did and after which, he could see. In a way, Jesus “sent” the man to the pool.

Liberal scholars have claimed that the Pool of Siloam never existed and that John’s gospel was pure allegory; the pool normally referred to by that name was built by Eudocia of Constantinople (AD 400–460) and could not have been the pool of Jesus’ time. 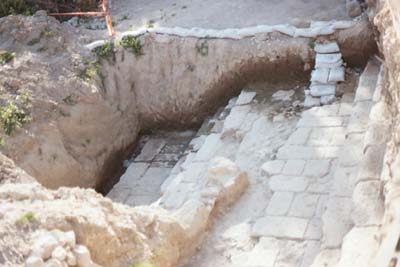 This liberal line of thinking was shown to be wrong in 2004, when a repair team, excavating a damaged sewer, uncovered two rows of stone steps. Subsequent excavation was by archeologists Eli Shukron (standing on the left in the photograph) who was working for the Israel Antiquities Authority. He was accompanied by the Ori Orbach (right in photo), who was asked to document the sewer excavation by way of photographs, on the behalf of the Israel Nature and Parks Authority.  As the stone steps were uncovered, there was revealed three groups 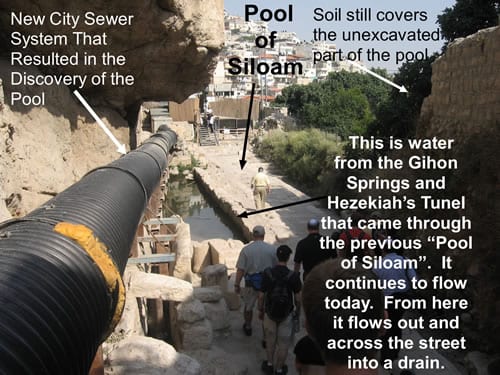 of five stairs, each about 60 meters long, leading down to a pool. The find was formally announced on August 9, 2005[1].

The pool is less than 65 metres from the edge of the Byzantine reconstruction of a pool previously thought to be the Pool of Siloam. This small pool collected some of the water as it emptied there at the southern end of Hezekiah’s Tunnel.[2] The water continued on through a channel into the recently discovered Pool of Siloam. The source of the water is from the Gihon Spring, located at the northern end of Hezekiah’s tunnel on the eastern side of the City of David. 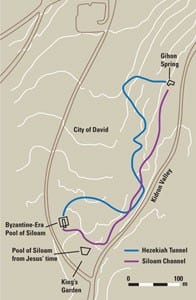 The pool is stone-lined, but underneath, there is evidence of an earlier version that was merely plastered (to help it retain water). Coins found within this plaster date from the time of Alexander Jannaeus (104–76 BC), while a separate collection of coins, dating from the time of the First Jewish–Roman War (AD 66–70), were also found.

Commenting on this discovery, James Charlesworth, a professor of New Testament at Princeton Theological Seminary, said:

To dismiss John as historically unimportant is absurd. Now it becomes clear that the gospel of John does have reliable historical information. We have found there is such a pool, precisely as John describes it.[3]

A good rule of thumb; those who criticize the Bible are always wrong.