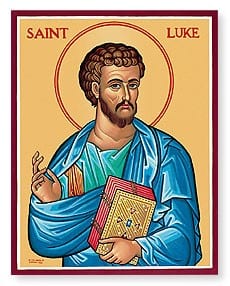 Luke wrote two letters addressed to his friend Theophilus which are part of the New Testament; the Gospel of Luke and the Acts of the Apostles. Both are long letters thereby making Luke the single greatest author of the New Testament; he wrote approximately one quarter of it. Paul tells us that Luke was a physician.[1] He was not one of Jesus’ disciples and may never have met Him, but he accompanied the apostle Paul extensively on his second and third missionary journeys.[2] In fact, Luke was the only friend who was with Paul as he was held in prison at the end of his life.[3]

It is possible that Luke may have been a native of Antioch in Syria, but Greek in birth and education. Some Bible students believe he may have been a Roman citizen. He was probably a Gentile, since Paul distinguishes him from Jewish co-workers.[4]

Luke gives the reasons for his writings in the first four verses of his gospel:

Many have undertaken to draw up an account of the things that have been fulfilled among us, 2 just as they were handed down to us by those who from the first were eyewitnesses and servants of the word.3 With this in mind, since I myself have carefully investigated everything from the beginning, I too decided to write an orderly account for you, most excellent Theophilus, 4 so that you may know the certainty of the things you have been taught.

From his opening statement, it is clear that Luke is drawing a large part of his information from other writings. Scholars agree that the gospels of both Mark and Matthew were in circulation by the time Luke wrote. Mark’s account of the ministry of Jesus was most likely the first and comprises 88% of Luke’s gospel.[5] In addition, Luke states that he obtained other information from eye witnesses to the events. For example, he alone tells of the resurrected Christ appearing to the two on the road to Emmaus. And since Luke is the only writer to give the account of the young Jesus conferring with the teachers in the temple when he was twelve years’ old,[6] shows that he may have spoken to members of Jesus’ family and quite possibly His mother Mary.

Luke was meticulous in his writings giving the name and the office held of many officials. For example, in the book of Acts, Luke mentions 32 countries, 54 cities and 9 Mediterranean islands. He also lists 95 people by name, 62 of which are not named elsewhere in the New Testament. In addition, Luke is intimately familiar with the constantly-changing political conditions of the Roman world. References to Augustus, Tiberius, Claudius, Quirinius, the Herods, Felix, and Festus are recorded. In not one of these citations is there a mistake.[7] However, Luke has been accused of incorrect designation of people, three examples follow.

In chapter three and verse one of his gospel, Luke refers to Lysanias tetrarch of Abilene as a ruler in about AD 30. For years, scholars have pointed to this as evidence that he was incorrect since it was well known that Lysanias was not a tetrarch but the ruler of Chalcis some 60 years earlier. If Luke can’t get this basic fact right they suggested, then nothing he has written can be trusted.

The year was 1737 and the famous British traveller Dr Richard Pocock recorded in his book; A Description of the East, Book 2, that during his travels, he came across a beautiful church which had a partly broken inscription which contained the name; Lysanias, tetrarch of Abilene. Unfortunately, the Byzantine church has been destroyed and the inscription lost, but remained in Pocock’s book. Others have been able to place the reign of Lysanias to the time Luke refers.[8]

Josephus, the first century Jewish historian, confirms the existence of Lysanias tetrarch of Abilene, being the one Luke mentions, in his book; Wars of the Jews Book 2, 12:8.[9]

So there were two rulers with the name Lysanias and Luke has been shown to have been correct with his statement that one was the tetrarch of Abilene. 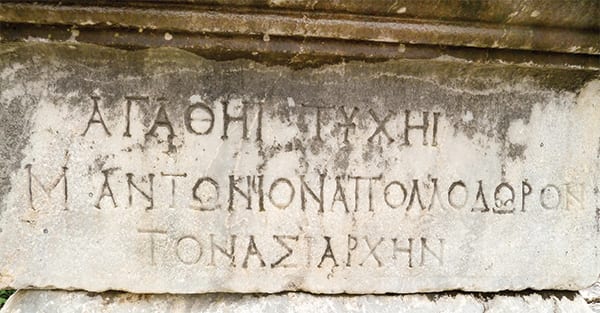 Luke gives the title; Asiarch to officials who suggested to Paul that he not go into the arena during the Ephesus riot as recorded in Acts 19:31: And even some of the Asiarchs, who were friends of his sent to him and were urging him not to venture into the theatre. Such a title is not mentioned anywhere else in the Bible. It was not common in ancient literature so scholars formerly viewed Luke’s use of the word with scepticism. However, it has since been found on more than a dozen inscriptions.[10] The inscription right containing the title, was discovered in Miletus which is only a short distance from ancient Ephesus, uses the word.

Luke mentions the city council of Thessalonica as politarchs (Acts 17:6 & 8). This title has caused some to question the accuracy of Luke since the word was not found in any other Greek literature. Politarches (πολιτάρχη) is a compound of polis (city) and arche (ruler). However, an archaeological discovery in 1835 revealed that politarches was an official title; a stone inscription on the Vardar Gate, right, in Thessaloniki used the title and Luke was vindicated.[11]

Luke has been shown to have been correct with the names of people and their titles as well as the places and events he mentioned. And again, a good rule of thumb; those who criticise the Bible are always wrong.

[2] This is shown as Luke’s commentary changes from third person to first person by the use of the personal pronouns “we” and “us” in acts 16:10.