Prophesies that did not come true 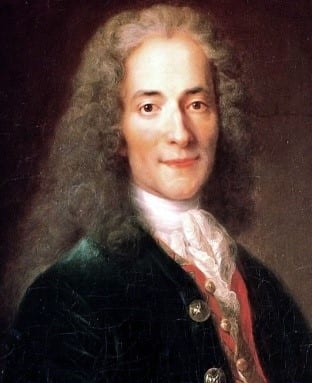 Francois-Marie Arouet (1694–1778), better known by his pen name Voltaire, was a French enlightenment writer, essayist, philosopher and deist.[1] (The picture right is a painting of Voltaire at the age of 24 by Catherine Lusurier after Nicolas de Largilliere’ painting.) Voltaire is remembered for his philosophical writings and defence of civil liberties. He is also known for his dislike of Christianity and the Bible which he ridiculed by way of his sharp wit, in accordance with which he is said to have made this statement:

In 100 years from my day there will not be a Bible in the earth, except the one that is looked upon by an antiquarian curiosity seeker.

In contrast to Voltaire’s statement, his house named Ferney (see picture below) was used after his death for the distribution of Bibles throughout Europe.

There is an enormous amount of misinformation and contradictory reports on the internet about whether Ferney  was used for this purpose. However, what cannot be denied are the transcripts below which are taken from their original sources thanks to Google’s digitized service.

When I arrived at Paris, one of the first things I heard was that a Bible society had been established at Ferney, chiefly by the aid of Baron de Stael. What a noble triumph for Christianity over this daring infidel. One of the first effect of the revival of true religion or even of sound learning in France, I should think would be to lower the credit of this profligate, crafty, superficial, ignorant, incorrect writer. What plea can wit or cleverness, or the force of satire or the talent of ridicule or a fascinating style, or the power of brilliant description, form, in a Christian country, for a man who employed them all, with a bitterness or ferocity, of mind amounting to almost madness, against the Christian religion and the person of our Saviour.[2]

A newly established branch at Ferney formerly the residence of Voltaire, has sent its first remittance, a sum of 167 francs.[3]

Further proof is contained in a transcript from the Quarterly Papers of the American and Foreign Bible Society of 1837:

A Bible Society was some years since established at Ferney, once the residence of Voltaire—the prince of infidels. This noble enterprise for the propagation of the Christian religion is said to have commenced by Baron de Stael, and a few zealous Christians in that place. In the history of Bible Societies, this is truly a memorial event. That the antidote should issue from the very spot where the poison of infidelity for so many years disseminated; and the advocates of Christianity should in that very place print and circulate the sacred volume, as a sufficient shield against misrepresentations sophistry which he had there assailed divine revelation, are the events which the brilliant Frenchman would have pronounced impossible.

“There” said a friend to Rev. A. Acworth, when in France, “this is the room where Voltaire’s plays were acted, for the amusement of himself and his friends, but now converted into a repository for Bibles. Oh! That, that gifted infidel could have been there, to witness the result and repent of his ratiocinations respecting the downfall of Christianity. But, there is a point beyond which divine forbearance does not extend.”[4]

I think that Psalm 8:3-4 is an appropriate response to Voltaire’s boastful prediction:

When I consider your heavens, the work of your fingers, the moon and the stars, which you have set in place. What is man that you are mindful of him.

The Creator of the Universe so easily made Voltaire’s words rebound on himself.

Again, more recently, John Lennon of The Beetles fame made the following statement which was reported in the London Evening Standard:

Christianity will go. It will vanish and shrink. Jesus was alright, but His disciples were thick and ordinary.[5]

John Lennon is now dead and The Beatles are just a faint memory in the minds of an older generation, but Christianity is expanding rapidly throughout Africa, South America and S E Asia.

Contrary to Voltaire’s prediction and what John Lennon had to say, Bible sales have grown at an almost exponential rate. For example, the Guinness eBook of Records states that 2,500,000,000 (2.5 billion) Bibles have been sold since 1815 and best estimates put the total production of Bibles at around 4 billion, as many have been printed and not sold but given away. The Bible has been translated into 2,233 languages.[6]

It is a terrible thing to make fun of God, not only is it a violation of the third commandment, it is insulting to the One who died so that all who believe can have eternal life with Him.[7]

To think that this life is all there is, is near sighted and foolish. The psalmist (14:1) tells us that:

The fool says in his heart, “There is no God.”

And as Luke relates Jesus’ words in chapter 16 of his gospel of the account of the rich man and Lazarus. The latter goes to heaven (Abraham’s bosom) and the rich man goes to hell. Both places are real.

Voltaire may have taken great pleasure in mocking God and to the delight of his audience as well. But, unless he made a death bed conversion, he is now being tormented in hell and for all eternity.[8]

[1]A religious belief holding that God created the universe and established rationally comprehensible moral and naturallaws but does not intervene in human affairs through miracles or supernatural revelation.

[4] Quarterly Papers of the American and Foreign Bible Society, No 11, New York, July 1837, page 21-22 (Digitized by Google under the heading Bible Society at Ferney).