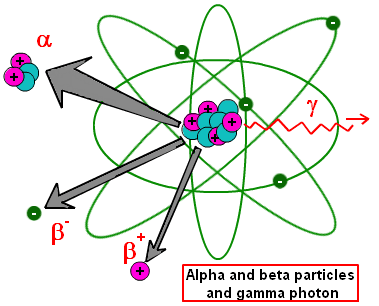 Isotopes are atoms of the same element which vary by the number of neutrons in their nucleus. Some isotopes have so many neutrons that the nucleus is unstable and reduces its size by releasing either alpha or beta particles or gamma rays. In such situations, the isotope is termed radioactive.

The key to radiometric dating is that radioactive isotopes normally decay at a precise rate and the time they take for half of the atoms to decay is known as the half-life. Half-lives can vary from fractions of a second to millions of years for different isotopes. The element that decays is called the parent and the element into which it breaks down is called the daughter. Radiometric dating does not measure dates but rather, it measures the ratio of parent to daughter elements. Then, knowing the rate of decay, it is possible to infer the time the process has taken. However, there are three major and unprovable assumptions involved with this method:

Because of these assumptions involved in radiometric dating, it is inherently unreliable.

Some examples of radiometric dating

There are many examples, some of which are listed below, where radiometric dating has given the wrong dates for specimens of known historical age.[1]

William Stanfield, Professor of Biological Sciences at California Polytechnic State University, an evolutionist and anti-creationist, concedes in his book:

It is obvious that radiometric techniques may not be the absolute dating methods they are claimed to be. Age estimates on a given geological stratum by different radiometric methods are quite often different, sometimes by hundreds of millions of years. There is no absolutely reliable long-term radiological clock.[13]

The age of any fossil can never be measured directly, only indirectly with large assumptions being made and almost entirely dependent on the discover’s world view. The cartoon to the right, compliments of Answers in Genesis, makes the point rather sarcastically.

Evolution requires eons of time, hence the inundation of long ages in everything we see and read; millions and even billions of years. Although time makes no difference as far as evolution is concerned because it is based on mutations which only degrade genes, and evolution requires an enormous increase of genetic information in going from a single cell organism (600,000 nucleotides) to human beings (>3 billion nucleotides).

As shown, radiometric dating is of no help to the evolutionist and it even provides strong evidence for a young earth with 14C being in everything. For powerful evidence in support of a young earth, go to: https://www.adefenceofthebible.com/2016/06/05/overwhelming-scientific-evidence-for-a-young-earth.

As shown previously, ice core dating when actual measurements are taken into account, does not support deep time either: https://www.adefenceofthebible.com/2017/05/01/ice-core-dating.

We are told ad nauseam that dinosaurs died out 65 million years ago. This is present in all nature shows, newspaper articles, books, in fact everything we read and see. The 65 Million years is not based on hard science, but merely to prop up evolution. For more on this, go to: https://www.adefenceofthebible.com/2017/02/14/did-dinosaurs-really-become-extinct-65-million-years-ago.

[1] Note: the last three examples involve sea creatures, and their incorrect dates are partly or wholly, due to the ‘Reservoir Effect.’ But this simply explains why the C-14 results are wrong. In fact, all radiometric dates which are wrong have valid explanations, most of which are due to the flawed assumptions behind the method, as explained above. The existence of valid explanations does not change the fact that the method gives wrong answers.