God’s promise to Abraham and his descendants

God gave Abraham irrevocable promises concerning his descendants[1]including the land of Canaan[2]. The promise of the land was repeated many times to Abraham.[3] God repeated the promises, including those relating to the land, to Abraham’s son Isaac and his descendants.[4] And then to Isaac’s second son, Jacob,[5] and the promises pertain to only the Children of Israel. The Arab people are descendants of Abraham through his son Ishmael whose mother was Hagar and clearly the promise of the land does not apply to them. God had changed Jacob’s name to Israel whose descendants became known as the Israelites. Today, they are known as the Jews. This latter name is derived from the members of Israel’s major tribe; Judah.

Implicit in the promise is that the people will remain separate, worship God only, and not take on the customs and practices of the people around them. However, if they do reject God and take on these practices, He will remove them from the land for a period of time.[6] They did just this, and God had them exiled into Babylon for 70 years, after which He brought them back as He promised.[7]

After several hundred years, the Jews rejected God and the One He sent to them; Jesus, the Messiah (Christ) and as a consequence, God had them removed from the land again. However, the promise of the land remained unconditional and everlasting. Their scattering started with the first Jewish uprising against their Roman occupiers, which was crushed with the destruction of Jerusalem and particularly the Temple, and the expulsion of the Jews in AD 70. The dispersion of the Jews from the land was complete when the second and final uprising was put down by the Romans in AD 135 and they named the land Syria Palaestina after the Jews great enemy the Philistines, which later became anglicised to Palestine. As a consequence, there were few Children of Israel in the land from that time on. But again, God promised to bring them back to the land a second time and this time from the four corners of the earth.[8]

During the following 1,813 years, the Jews were persecuted in almost every country in which they lived. This culminated in the Holocaust, with which Adolf Hitler tried to eliminate them completely. Amazingly, on May 14, 1948, Israel was declared a state by the United Nations (Resolution 181) and God’s chosen people began to re-inhabit the land. This seems to be a fulfillment of Isaiah’s remarkable prophecy concerning Israel:

Before she goes into labor, she gives birth; before the pains come upon her, she delivers a son. Who has ever heard of such a thing? Who has ever seen such a thing? Can a country be born in a day or a nation be brought forth in a moment?[9]

Thus, Isaiah poses the rhetorical question: “Can a nation be born in a day …” Normally, the answer would be no. But when dealing with the supernatural history of Israel, the answer turned out to be yes.

God’s unconditional promise to Abraham and to his descendants, made around 4,000 years ago, hold true today. His people have remained separate and clearly identifiable; despots have used this fact over the centuries to terrible effect. In defiance of historical precedents, the Jews have not blended in and become absorbed into other people groups. They are back in their own land.

Israel attacked one day after being declared a state

The day after Israel was declared a state, she was attacked by the combined forces of five Arab nations; Trans-jordan, Egypt, Syria, Iraq and Lebanon. Azzam Pasha, the secretary-general of the Arab League said it would be; a momentous massacre, which will be spoken of just like the Mongolians massacred the Crusades.[10] Miraculously, the Jews fought off their attackers.

In 1965 President Nasser of Egypt declared:

We aim at the total destruction of State of Israel. The immediate aim: perfection of Arab military might. The national aim: the eradication of Israel. 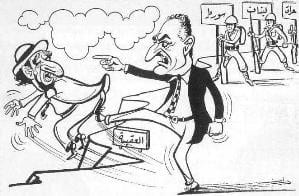 This pre-1967 war cartoon appeared in Al-Jarida newspaper, Lebanon, depicting Nasser, backed by the Arab states, kicking Israel into the Gulf of Aqaba.

On May 15, 1967, Egyptian forces moved into the Sinai. On May 18, Egypt expelled the UN Peacekeeping forces from Israel’s borders and on the 22nd, Egypt closed the Straits of Tiran to Israeli shipping. On the 25th, encouraged by Egypt; Syria, Jordan, Iraq and Saudi Arabia moved their troops to Israel’s borders.

Pacts were signed by Egypt with Jordan and Iraq on May 30 and June 4, thereby completing the encirclement of Israel.

The existence of Israel is an error which must be rectified. This is our opportunity to wipe out the ignominy which has been with us since 1948.Our goal is clear—to wipe Israel off the map.

Understanding that their country was about to be attacked from all sides by an overwhelming force; best estimates put the entire Arab force at 200,000 troops, 1,600 tanks and 700 war planes,[11] on June 5, Israel launched a preemptive attack on Egypt and destroyed her air force of 300 MIGs in two hours and continued to destroy almost the entire air force of Syria and Jordan in the first day. Israel lost 19 planes primarily from ground based aircraft fire. Israel issued an appeal to Jordan to stay out of the war. Jordan refused and opened a heavy artillery barrage on both west Jerusalem and the Tel-Aviv area that forced Israel to counterattack. By June 7, the Israel Defense Force (IDF) had taken all of Jerusalem including its sacred Temple Mount and by June 8 it had defeated the Jordanian army and captured the whole of the West Bank. On the morning of June 9, Israel attacked the Syrians on the Golan Heights and captured this strategic area. 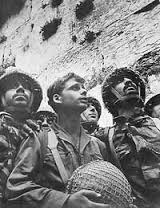 Pictured right are Israeli para-troopers at the Wailing Wall, the most holy site in Judaism, after the taking control of Jerusalem for the first time in well over 2,000 years.

Miraculously, in just six days, despite having been attacked from all sides and facing overwhelming forces against them, Israel had captured the entire Sinai Peninsula, the Gaza strip, the West Bank, Jerusalem and the Golan Heights.

Again, what the Bible stated God said 4,000 years ago has been shown to be correct. Clearly, the hand of God is on Israel and He has kept His promise to Abraham. But unfortunately, this was not to be the end of Arab attempts to destroy the nation of Israel.