The Human Eye; a masterpiece of design

subsystems, including the retina, pupil, iris, cornea, lens and optic nerve. For instance, the retina has approximately 137 million special cells that respond to light and send messages to the brain. About 130 million of these cells look like rods and handle the black and white vision. The other seven million are cone-shaped and allow us to see in color. The retina cells receive light impressions, which are converted to electric pulses and sent to the brain via the optic nerve. A special section of the brain, called the visual cortex transforms the pulses to color, contrast, depth, etc., which allows us to see ‘pictures’ of our world in three dimensions. Amazingly, the eye, the optic nerve and the brain’s visual cortex are totally separate and distinct subsystems. Yet, together they capture, deliver and interpret up to 1.5 million pulse messages every milli-second (one thousandth of a second)!

Another aspect of the eye, which adds to its almost incomprehensible complexity, is a group of tiny eye movements. There are three nearly imperceptible motions of the eye referred to as ‘tremors’, ‘drifts’ and ‘saccades’. Tremors continuously and rapidly wobble the eyeball about its center in a circular fashion. The diameter of the circle around which the eye moves is a minute one thousandth of a millimeter (0.00004 inch). The wobble this movement produces happens 30 to 70 times per second, which on average results in one million circular motions every 5½ hours. Without such eye tremors, vision would not be clear.

When focused on a target, the eye drifts relatively slowly and smoothly away until it reaches an angle equal to about12 times the size of a tremor, at which time it suddenly jerks back to its original position. This quick jerking back is by way of a saccade. There can be several saccades every second. These three imperceptible eye movements prevent the light-sensing cells in the retina from becoming ‘stabilised’; a condition that would prevent them from sending updated information to the brain. A lack of fresh information would cause the image the brain perceives to become a uniform grey.[1] 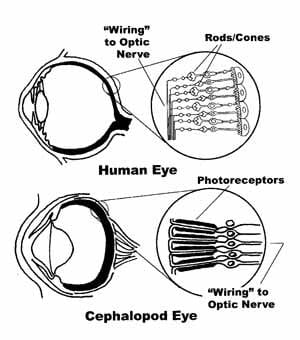 Atheist and ex professor, Richard Dawkins claims that the ‘fact’ that our eyes are wired backwards disproves the idea that the eye is an example of good design.[2] This assertion is based on the fact that the nerves which carry information from the retina to the brain actually go across in front of the retina, as shown in the diagram, thereby obscuring some of the incoming light shining on the rods and cones and creating a blind spot when they go back through it to the brain.

However, the idea that the eye is wired backward comes from a lack of knowledge of eye function and anatomy, says ophthalmologist Dr George Marshall. In fact, the eye would not function if this forest of connecting bundles of nerves came from the back of the retina.[3] 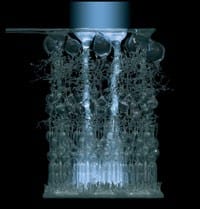 Recently, in a major blow to the proponents of ‘backward wiring’, Israeli scientists have shown that this structure of the vertebrate eye actually improves vision because the nerve net contains cells (Müller cells) which act as optical fibers that help filter and focus light, making images clearer and keeping the colors sharp as shown in this computer generated image.[4] Kate McAlpine, author of the New Scientist article which commented on the Israeli finding, states:

It looks wrong, but the strange, ‘backwards’ structure of the vertebrate retina actually improves vision.

So the eye is an excellent example of design, after all.

To suppose that the eye with all its inimitable contrivances for adjusting the focus to different distances, for admitting different amounts of light, for the correction of spherical and chromatic aberration, could have formed by natural selection seems, I freely confess, absurd in the highest degree.[5]

Darwin posed this statement rhetorically and then attempted to explain how the eye could have evolved through natural selection. But this explanation is completely wrong as natural selection can only select from what is present already; it cannot create a new biological pathway, a new system of enzymes, or new genes, it can only concentrate traits that are present in the living species. Darwin’s original statement was true then as it is now.

If it could be demonstrated that any complex organ existed which could not possibly have been formed by numerous, successive, slight modifications, my theory would absolutely break down. But I can find no such case.[6]

Darwin may not have, or did not want to, but many other people have. Dr Jonathan Sarfati discusses many more amazing examples of irreducible complexity in his book By Design, under the subheading: Evidence for nature’s Intelligent Designer—the God of the Bible.[7]

Of course, it is not possible to have design without a Designer.