James Ussher (1581–1656) was Archbishop of Armagh Irish Anglican Church. He meticulously worked back through the Bible to calculate the date of creation and other significant dates. He calculated the date of God confusing the language at Babel to be 2242 BC.[1] Recorded Chinese culture goes back to the establishment of its first dynasty, the Xia dynasty in 2070 BC.[2] This marks the historical beginning of China’s 4,000 years of unbroken dynastic culture and civilisation. These dates show that the Chinese language would go back to God’s confusion of the languages at Babel[3] and  that the Chinese language would be a product of this. At the time of language confusion, the people would had have known the history recorded in Genesis as Noah’s father was 56 when Adam died. There were only five generations from him 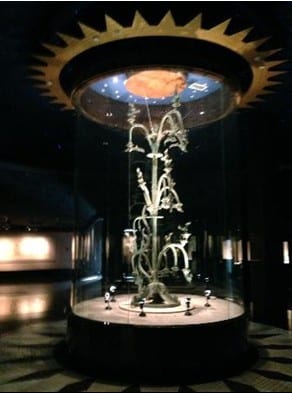 to Babel as shown in Genesis 11:1-9. Therefore shouldn’t the events of Genesis be evident in their culture and language? It is! And dramatically so. Over the next three blogs we will reveal how the Genesis account was present in ancient Chinese culture.

This article is largely taken from a report by Stephen Brennecke.[4] While digging for clay in 1986, workers from a brickyard in Guanghan unearthed a large cache’ of almost 1,000 artefacts made of jade, bronze, gold, ivory, pottery, marble and other items made of bone from two pits, which authorities estimate to have been buried for 2,700 to 4,700 years. Among them was a very large highly stylised tree made of bronze about four metres high, shown right, as it appears in the Guanghan Sanxingdui Museum, China.

One cannot miss the similarities between this tree and the one involved in the Genesis account of the temptation of Eve; the Tree of Knowledge of Good and Evil.[5] 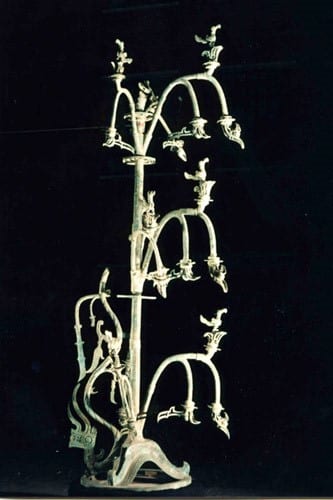 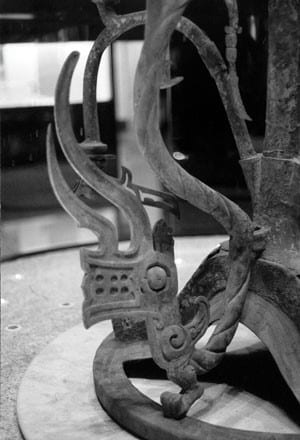 base, but the snake’s head is looking up (LHS of image far left). It has two horns and two feet (image left). Stephen Brennecke commented, God’s curse upon the serpent in Genesis 3:14 was to ‘crawl’ upon his belly and eat dust implying perhaps that he walked upon legs before the fruit was taken. 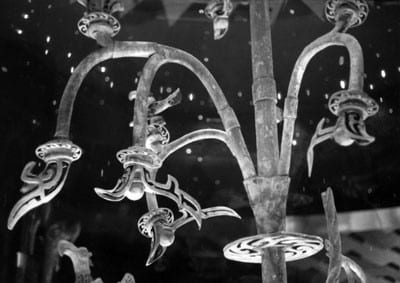 The tree is bearing round fruit surrounded by large knives (image below) giving the impression that the fruit is forbidden. Each branch is terminated by one piece of fruit and all are present. As well, the snake’s head has been designed to appear deadly or be associated with death. Also, it has a knife similar to those around the fruit, at its tail. Note, some of the snake is missing. 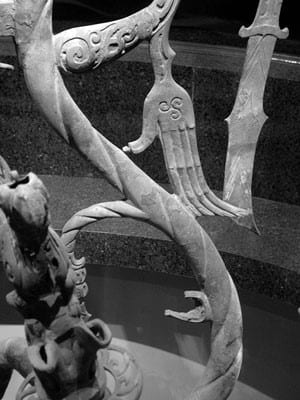 The structure contains a clearly identifiable   human hand with an opposing thumb, correctly placed knuckles and fingernails (image left). None of the fruit is missing and the structure appears to be frozen in time with the hand (Eve’s) poised, but no fruit taken and Brennecke commented: The tree depicts the last moments of human innocents before God.

What are the implications of the Sanxingdui tree?

For Christians, the implications are powerful. The Sanxingdui people existed from 2,800 to 800 BC.[6] Moses, who the Bible states, wrote its first five books,[7] even at the very start of Genesis there is a reference to it being written.[8] Moses was repeatedly instructed by God to write what God had told him.[9] We can never be sure if Moses received direct inspiration from God of the very words he wrote, or he used the creation account which had been passed down from Adam, or he read from clay writings (cuneiform) that had been preserved, but there is a fair amount of certainty that Moses wrote during the Exodus and this commenced in 1,445-6 BC.[10]

Brennecke commented: If the bronze tree was created before Moses wrote (which is likely) and independent of his writings (which is almost certain), we are faced with another question: how did the Sanxingdui People come to know about the Tree of Knowledge of Good and Evil?

It seems that the Sanxingdui People shared the same ancestral traditions as the people from whom God called Abram and created the nation of Israel. Genesis 11 supports this notion, as it records the confounding of the languages of man and the dispersion of mankind from the Tower of Babel to the various parts of the earth. The account of the dispersion indicates that the people were at that time, one people with one language. Although God confounded their language, they retained a common technology and common heritage with common ancestral traditions, which included the events of The Fall of mankind that occurred at the foot of the tree.

If the Bronze Tree was created before Moses wrote Genesis, or if it was created independently of his inspired writing, the Scriptures have an unbiased ‘triangulation’ in this artefact which compliments the Genesis account in intimate detail.

[10] 1 Kings 6:1 tells us that Solomon commenced the temple in the 480th year the Israelites came out of Egypt. Synchronisations between certain events in the reigns of later Israelite kings and Assyrian chronology records fix the date of the fourth year of Solomon’s reign at 966 BC giving the date of the Exodus at 1,446 BC (NIV Study Bible,1985, page 480).