Continuing from Part 1; recorded Chinese history can be traced back to God’s dispersion (confusion) of the languages at Babel and their knowledge of the events of Genesis before then. This is evident in their ancient culture. Below is part 2 of this three-part series. 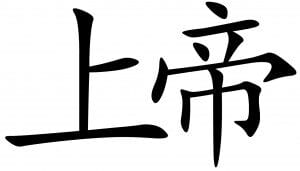 For more than 4,000 years the reigning emperors of China travelled annually to the border of their country or later, to the imperial city. There, on an outdoor alter, they sacrificed and burnt unblemished bullocks to their God, Shang Di [上帝]. The name means God above, or Supreme God. The first radical 上 Shang, means “high”, “highest”, “first”, “primordial”; the second radical 帝, Di, literally means God. So, Shang Di was the “Highest Deity”, but also have the implied meaning of “Primordial Deity” or “First Deity” in Classical Chinese[1]

An early notation of a law of Shang Di appears in several references in Zhou literature. They attribute to Shang Di the power of governing the celestial bodies, the order of nature and the order of man. The 4th century BC philosopher, Mozi, gave credit to Shang Di for ordering the heavenly bodies and the four seasons.[2]

As the emperor took part in the annual Border Sacrifice which was dedicated to Shang Di, the following words were recited regarding Shang Di:

Of old in the beginning, there was the great chaos, without form and dark. The five elements [planets] had not begun to revolve, nor the sun and moon to shine. You, O Spiritual Sovereign, first divided the grosser parts from the purer. You made heaven. You made earth. You made man. All things with their reproducing power got their being.

Then Te [Shang Di], the Lord, had so decreed, He called into existence [originated] heaven, earth, and man. Between heaven and earth He separately placed in order men and things, all overspread by the heavens.[3]

These citations show clearly that the Chinese believed Shang Di to be the Creator who spoke all things into existence. He made the whole cosmos, mankind and gave all life the ability to reproduce. Other recitations state that Shang Di is eternal, His love extends over all creation and his goodness cannot be measured.[4] All in accordance with Genesis Chapters 1-2.

Scottish protestant minister James Legge (1815-1897) spent many years in China studying the Chinese God, Shang Di, he even ascended the Alter of Heaven and observed the Imperial Sacrifices. In 1852, he published the compilation of his work under the heading; Notions of the Chinese Concerning God and Spirits[5] in which he argued persuasively that the Chinese God Shang Di, was the same God as the Christian God.[6]

Genesis chapter 4 records both Cain and Abel bringing offerings to the Lord. Cain’s was fruits of the soil, while Abel sacrificed the first born of his flock. If Abel brought an animal sacrifice to the Lord, we would expect that his parents had already developed a pattern of sacrifice. This being the case, where would they build an alter for the sacrifice? It seems likely that it would be the closest place to God, which would have been on the eastern border of the Garden of Eden from where they were expelled. Nelson and Broadberry believe that this is how the name Border Sacrifice originated.[7]

The Border Sacrifice was a ceremony conducted on China’s eastern border and in a continuous sequence ever since the legendary period of Chinese history, before the first dynastic rule began. That is, for over 4,000 years. Unfortunately, the Border Sacrifice became closely identified with the rulership of China, for the emperor himself acting as the High Priest, was the chief participant in the ceremony. Consequently, when the Manchus were deposed in 1911, not only did the dynastic reign end forever, but so did the Border Sacrifice.[8] 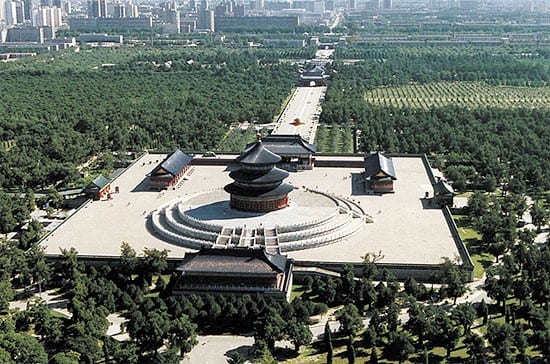 The earliest accounts of this sacrifice, are found in the Shu Jing (Book of History) compiled by Confucius, where it is recorded of Emperor Shun (about 2230 BC) that he sacrificed to Shang Di. From an early date, the Chinese were already offering sacrifices to Shang Di on an altar of earth on top of Mount Tai in Shan-Dong, at the eastern border of China. In the 15th century AD, this important sacrifice was moved to the southern part of Beijing to what is called the Temple of Heaven Complex (pictured right) which is four times larger than the forbidden City complex. It comprises three sections; the Hall of Prayer, Imperial Vault and the Altar of Heaven. A tablet on the north wall contains characters clearly showing that Shang Di was the God they worshipped in the Border Sacrifice.[9]

The Border Sacrifice ceremony performed by the Emperor at the Temple of Heaven shows startling and meaningful parallels with the sacrificial system prescribed in the Bible. Dr Chan Kei Thong, CEO Leadership Development International, and author of Faith of our Fathers writes:

From the very beginning of China’s long history, Shang Di has been revealing the truth of blood covenants to the Chinese people in order to prepare them to receive life’s greatest blessing; salvation through the eternal Tian Zi (Son of Heaven), Son of God, who is Jesus Christ. Rather than being a

founder of a Western religion, Jesus Christ is the fulfilment of the longing expressed annually through the shedding of blood at the Border Sacrifice for an unbroken, unblemished relationship with Shang Di. The same Creator God that China knew dimly through the millennia can now be known intimately and clearly through His special revelation in Jesus Christ.[10] This is even expressed in modern Chinese characters as shown.

Dr Thong sums up his long and thorough research which he published under the title; Faith of our Fathers: God in Ancient China, in 2006, with this statement:

The ancient Chinese religion was about as pure a worship of the Creator God as possible without special revelation. Our research did not reveal any other ancient people with a written record of the worship of the Creator God that comes as close to the biblical revelation as this well documented record of the ancient Chinese.[11]

Many books have been published by experts in their field of Chinese religion. They all come to the same conclusion that the all-powerful creator God that the Chinese have worshipped for over 4,000 years; Shang Di, is the same God as the God of the Bible. And this can be traced all of the way back to when God dispersed the languages at the Tower of Babel of Genesis 11. Four of such are: James Legge, The Notions of the Chinese Concerning God and Spirits (1852); Chan Kei Thong, Faith of our Fathers: God in Ancient China (2006); Ethel R Nelson and Richard E Broadberry God’s Promise to the Chinese (2014) and Ginger Tong Chock, Genesis in Ancient China, 2015.

The creator God of the Bible is not just a Western God but also the God of the Chineses and in fact, all nations.