Continuing from Parts 1 and 2; recorded Chinese history can be traced back to God’s dispersion (confusion) of the languages at Babel and the Chinese knowledge of the events of Genesis before then, which is evident in their ancient culture. Below is part 3 of this three-part series.

According to tradition, during the reign of the Yellow Emperor Huang Di, the first characters, simple drawings of familiar objects, picture words (pictographs) were invented.[1] Other examples are Sumerian cuneiform and Egyptian hieroglyphics. A much later development is an alphabet which allowed for pronunciation of the written information. Some ancient forms of writing have evolved, to enable the reader to pronounce what was written. Chinese is such a case whereby phonetic complements were inserted in some characters. Chinese like all languages has changed over its 4,000 years of existence. During with the passage of time over the many centuries, the origin and accurate meaning of these original pictographs were lost or became blurred; and even the true meaning of Shang Di also became misunderstood. Superimposed on all of this is stylistic variations of writing characters. However, a major find has provided an insight into early Chinese writing. 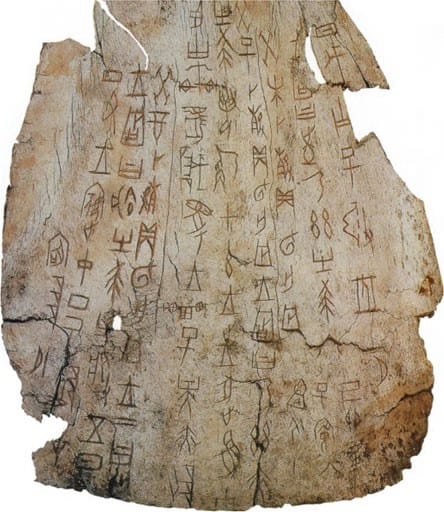 The oracle bones were discovered during the 1800s by two Chinese scholars, who noticed inscriptions on turtle shells sold in Chinese medicine shops in Peking. The oracle bones were first excavated and cataloged in 1899 from a site in Anyang, near Yinxu, the ancient capital of the latter part of the Shang Dynasty of China, located in present-day Henan Province. In these and subsequent excavations near Anyang, more than 100,000 oracle bones have been found, inscribed with more than 1.6 million characters.[2] The oracle bone texts are the oldest extant documents written in the Chinese language. They are inscribed on ox shoulder-blades and the flat under-part of turtle shells (as shown). They record questions to which answers were sought by divination at the court of the royal house of Shang 商, which ruled central China between the 16th and 11th centuries BC.[3] These writings go back about 3,500 years.

Genesis in the Oracle pictographs

Dr Ethel Nelson provides six examples in her book God’s Promise to the Chinese.[4] I acknowledge and am grateful to Karen Chin for providing me with all of the Chinese radicals and characters that follow.

There were two trees in the Garden of Eden; the Tree of Life and the Tree of Knowledge of Good and Evil. Genesis 3:6, a woman facing one tree, coveting the fruit, with her back to the other tree conveys the idea of coveting or desiring.

Genesis 3:1-5. The serpent (Satan) lied about the trees and the negative consequences.

Genesis 3:16-24. Eating of the tree in the garden brought trouble, difficulty.

There are many more examples included in the Oracle Bone Writings which support the account in Genesis. These can be found in Dr Nelson’s book already mentioned and Ginger Tong Chock’s book; Genesis in Ancient China, Eastwood Garden Publishing, 2015.

Even Traditional Chinese written today, show elements of Genesis are still present in their characters. Ten examples which are taken from a booklet produced by Great Commission Ministry; www.gcm.org.au, follow:

Blessing is what the first man (Adam) had with God in the Garden of Eden, Genesis 2:8.

God took the dust, breathed into it and created life in a man who walked, Genesis 2:7.

God used the dust to create the first man and he became a living person, Genesis 2:7.

The devil secretly went into the garden and spoke like a man to Eve, Genesis 3:1-6.

The woman rejected the Tree of Life to eat from the Tree of Knowledge of Good and Evil; she was greedy, Genesis 3:6.

Adam and Eve were forbidden by God to eat from the Tree of Knowledge of Good and Evil, Genesis 3:15-17.

Obviously, the Chinese knew about the Flood and Noah’s Ark which contained eight people (Noah, his wife and their three sons and three daughters-in-law), Genesis 7:7.

The world had only one language and the people combined to build a very high tower out of mud/clay bricks, Genesis 11:1-9.

The next day John saw Jesus coming toward him and said, “Look the Lamb of God who takes away the sin of the world.” John 1:29.

The Bronze Tree of Sanxingdui, is a remarkable representation of the Tree of Knowledge of Good and Evil which Satan used to bring down Adam and Eve. The four thousand years of the Chinese worship of their supreme God, Shang Di and their ritual sacrifice to Him is in accordance with Abel’s and presumably his parents’ sacrifice to God. And finally, the Chinese radicals and characters shown here provide so much confirmation of the Genesis events. All of which combine to support the Hebrew record of biblical history.

For people who would like to know more on this topic, there are two hour plus youtube videos shown below: