There is something different about God’s chosen people; Part 3

Deuteronomy chapter 28 records Moses’ address to the Children of Israel before they were to enter the Promised Land. In it he describes the blessings the people will get if they worship God only. This is followed by the curses that will come upon them if they reject God. They did reject God and the curses applied. They would be removed from the land and scattered to the “four corners of the world” they would be persecuted and their name would become a term of derision. These were chronicled in Part 1. God promised to bring them back to the land and we looked at these promises in Part 2.

I will bring back the captives of My people Israel; They shall build the waste cities and inhabit them; They shall plant vineyards and drink wine from them; They shall also make gardens and eat fruit from them. I will plant them in their land, And no longer shall they be pulled up from the land I have given them,” Says the LORD your God.[1]

because it states that they will not be removed from the land anymore.

Israel since they were given the land 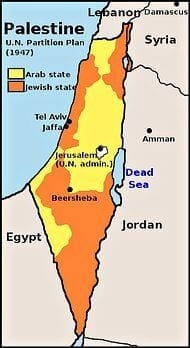 The land that the United Nations gave to the Jews was very small just 5,500 sq miles for their population of 600,000 people. The Israelis are in a very insecure position as their tiny piece of land is surrounded by extremely large Arab/Muslim neighbours whose holy book, the Koran, tells them to kill both Jewish 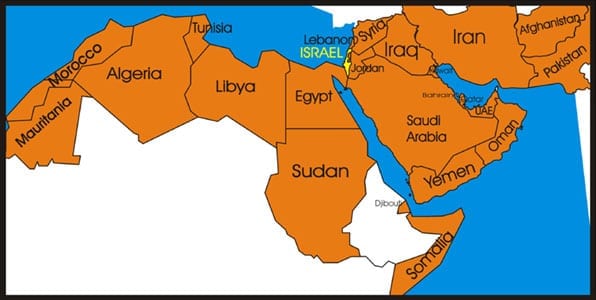 and Christian people. But God said through His prophet Amos that He will not allow them to be “pulled up from the land.”

On the day that Israel declared its independence, the Arab League Secretary, General Azzam Pasha, declared ‘jihad,’ a holy war. He said:

This will be a war of extermination and a momentous massacre which will be spoken of like the Mongolian massacres and the Crusades. 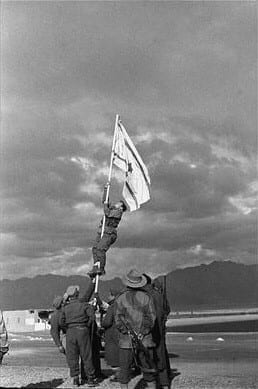 The armies of Lebanon, Syria, Jordan, Egypt and Iraq invaded the tiny new country with the declared intent of destroying it. However, the new Jewish state survived. In 1949 Israel signed armistice agreements with several Arab states, including Jordan, which annexed the area of Judea and Samaria, now known as the West Bank. From there they were to launch many attacks against the very vulnerable Jewish people. The image is of the raising of the flag on Israel’s most southern border in 1949.

On May 15, 1967, Egyptian forces moved into the Sinai. On May 18, Egypt expelled the UN Peacekeeping forces from Israel’s borders. On the 22nd, Egypt closed the Straits of Tiran to Israeli shipping. On the 25th, encouraged by Egypt; Syria, Jordan, Iraq and Saudi Arabia moved their troops to Israel’s borders. 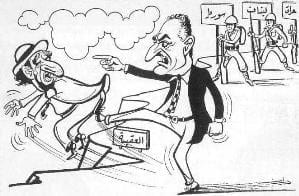 Just after this, on May 26, President Nasser of Egypt declared:

Our basic goal is the destruction of Israel. The Arab people want to fight … The mining of Sharm El Sheik is a confrontation with Israel.

The sketch is pre-1967 War, a cartoon published in Al-Ja rida newspaper of Nasser, backed by Arab states, kicking Israel into the Gulf of Aqaba.

Pacts were signed by Egypt with Jordan and Iraq on May 30 and June 4, thereby completing the encirclement of Israel.

On June 5, Israel launched a pre-emptive attack on Egypt and destroyed her air force in two hours. Israel issued an appeal to Jordan to stay out of the war. Jordan refused and opened a heavy artillery barrage on both west Jerusalem and the Tel-Aviv area that forced Israel to counterattack. By June 8, the Israel Defense Forces had defeated the Jordanian forces and captured the whole of the West Bank. On the morning of June 9, Israel attacked the Syrians on the Golan Heights and captured this strategic area.

In just six days, despite having been attacked from all sides and facing overwhelming odds against them, Israel had captured the entire Sinai Peninsula, the Gaza strip, the West Bank and the Golan Heights. But this was not to be the end of Arab attempts to destroy the nation of Israel.

On October 6, 1973—Yom Kippur, the Day of Atonement, the holiest day in the Jewish calendar, Egypt and Syria opened a coordinated surprise attack against Israel. On the Golan Heights approximately 180 Israeli tanks faced an onslaught of 1,400 Syrian tanks. Along the Suez Canal, fewer than 500 Israeli defenders were attacked by 80,000 Egyptians.

At least nine Arab states, including four non-Middle Eastern nations, actively aided the Egyptian–Syrian war effort. A few months before the Yom Kippur War, Iraq transferred a squadron of Hunter jets to Egypt. During the war, an Iraqi division of some 18,000 men and several hundred tanks was deployed in the central Golan and participated in the October 16 attack against Israeli positions. Iraqi MiGs began operating over the Golan Heights as early as October 8, the third day of the war.

Besides serving as financial underwriters, Saudi Arabia and Kuwait committed men to battle. A Saudi brigade of approximately 3,000 troops was dispatched to Syria, where it participated in fighting along the approaches to Damascus. Also, violating Paris’s ban on the transfer of French-made weapons, Libya sent Mirage fighters to Egypt (from 1971 to 1973, President Muammar Qaddafi gave Cairo more than $1 billion in aid to re-arm Egypt and to pay the Soviets for weapons delivered).

Other North African countries responded to Arab and Soviet calls to aid the front-line states. Algeria sent three aircraft squadrons of fighters and bombers, an armored brigade and 150 tanks. Approximately 1,000–2,000 Tunisian soldiers were positioned in the Nile Delta. Sudan stationed 3,500 troops in southern Egypt, and Morocco sent three brigades to the front lines, including 2,500 men to Syria.

Thrown onto the defensive during the first two days of fighting, Israel mobilised its reserves and eventually repulsed the invaders and carried the war deep into Syria and Egypt. The Arab states were swiftly resupplied by sea and air from the Soviet Union, which rejected U.S. efforts to work toward an immediate cease-fire. As a result of a pleading telephone call from Israel’s Prime Minister Golda Meir at 3am, President Nixon of the United States ordered an air lift of 22,000 tons of equipment, involving 566 flights. To pay for this infusion of weapons, Nixon asked congress for and received 2.2 billion dollars in emergency aid for Israel.

What makes Meir’s telephone call more interesting is that, according to Grant McKay’s Against All Odds: Israel Survives, as Nixon sat on the side of his bed listening to Golda Meir, her words prompted him to recall his own mother’s voice:

…as a young boy growing up, his mother had told him that one day he would be in a powerful position, and a situation would arise where Israel and the Jews needed his help. When it did, he was to help them.[2] 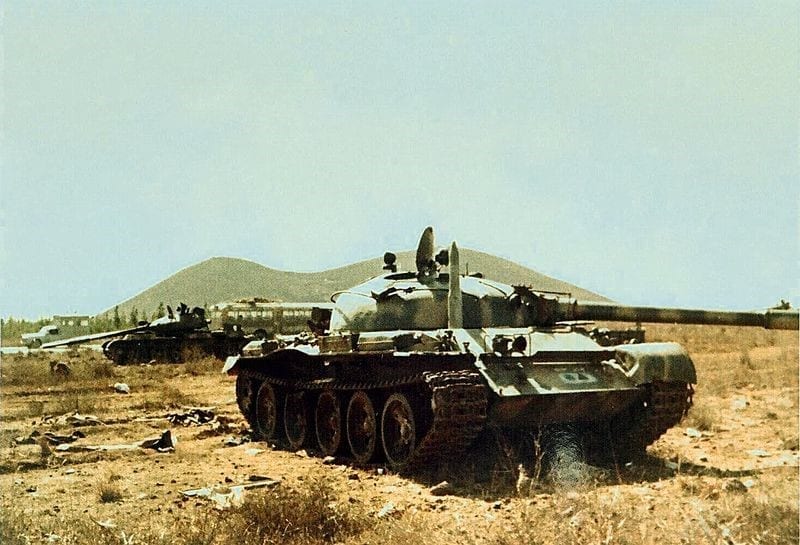 Two weeks later, Egypt was saved from a disastrous defeat by the UN Security Council, which had failed to act while the tide was in the Arabs’ favor. The image is of an abandoned Syrian tank on the Golan Heights.

From the early 1970s to the present, Israel has undergone constant bombardment, usually in the form of ever increasing sophisticated rockets, from Muslim militia based in southern Lebanon and Gaza. Yet Israel still exists despite the efforts of an overwhelming cohort of its neighbors to eliminate it.

Can anyone doubt that the hand of God is on Israel?

In order to complete this section on prophecies concerning God’s Chosen People and the land, it is necessary to mention briefly that many Bible scholars interpret the prophecies of Ezekiel,[3] Joel[4] and the Revelation[5] as foretelling an attack on Israel known as the Battle of Armageddon. This is prophesied to take place at the end of the Great Tribulation, by an overwhelming force coming predominantly from the north, and is still future to us. Some have suggested that this army could comprise a confederation of Russian and Muslim nations. Prophecy states also that when His people cry out to Him, God will step in, destroy these armies and save His people;

[7] A thorough discussion on this topic is contained in many books, including: John Ecob, The Bible Prophecy Handbook, Herald of Hope, 2003 (Available from Herald of Hope magazine, PO Box 4216, Marayong, NSW, 2148, Australia); Randall Price, The Coming Last Days Temple, Harvest House Publishers, 1999; Michael A. Redick, Ready for His Return, How to live in the Light of Eternity, Nosnuma Singapore, 2010.