There is something different about God’s chosen people; Part 2

In part one of this series we saw how the Jews have been awarded more Nobel Prizes; 22.5% of them when they represent less than 0.1% of humanity. Also, we saw the fulfillment of prophetic verses in the Bible that forecast their continual suffering as well as their name being used as a term of derision and this has taken place over a period of 2,700 years. This blog is about the most remarkable feat of any group of people; their return to their ancestral land after 1813 years of dispersion to the “four corners of the world.”

When God called Abram (later God changed his name to Abraham) to go to the land I will show you, and that He would make him into a great nation, He would bless him and all people on earth will be blessed through him. The fulfillment of these promises depended only on God and not on Abraham, since it was God who made the promises. When Abram arrived at the place God sent him; Canaan, God said, “To your offspring I will give this land.”[1] Later, God reiterated His commitment to give Abraham’s offspring the land, only this time He states that the gift of the land will be forever.[2] This promise was repeated to Abraham’s son Isaac[3] and then to Isaac’s second son Jacob[4] whose name God changed to Israel[5] and his descendants became known as the Children of Israel. It is worth noting that the promise of the land was not made to the descendants of Isaac’s half-brother Ishmael, who became the Arab people.

There is no doubt that the land of Canaan, was given to the Jews as an unconditional and everlasting gift by God. The Romans changed the name of the land to Syria Palestina which later became anglicised to Palestine, after the second Jewish revolt in AD133–135,

Just as the Israelites were to enter Canaan, the Promised Land, Moses outlined to them (as recorded in Deuteronomy 28) the blessings they would receive if they followed the Lord and worshipped Him only. However, if they did not follow the Lord, there would be consequences of this disobedience, which Moses went on to explain. The list is long and concludes with:

Then the LORD will scatter you among all peoples, from one end of the earth to the other, and there you shall serve other gods, which neither you nor your fathers have known—wood and stone. And among those nations you shall find no rest, nor shall the sole of your foot have a resting place; but there the LORD will give you a trembling heart, failing eyes, and anguish of soul.[6]

And again, in Leviticus:

I will scatter you among the nations, and draw out a sword after you; your land shall be desolate, and your cities waste.[7]

Throughout the Bible, the Jewish people were repeatedly commanded by God not to assimilate into the other nations by absorbing their customs, or their gods. Neither were they to marry foreigners from the people amongst whom they lived. They were to remain there as Jews. This they did. However, it has been used to terrible effect by despots and tyrants down through the centuries as was chronicled in Part 1. After being given special revelation by God about the coming Messiah who became God incarnate (in the flesh), they rejected Him and the curses listed in Deuteronomy applied. The prophecies regarding their dispersion have been realised as the Jews inhabit every nation on earth, but have never found rest. 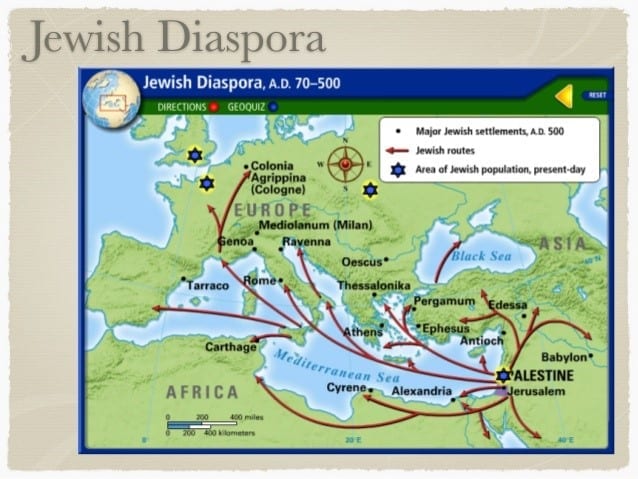 Prophecies concerning their return to the land

Jeremiah wrote in about 590 BC:

But I will gather the remnant of My flock out of all countries where I have driven them, and bring them back to their folds; and they shall be fruitful and increase.[8]

This is what the sovereign LORD says: I will gather you from the nations, and bring you back from the countries where you have been scattered, and I will give you the land of Israel again.[9]

It shall come to pass in that day, that the Lord will set His hand again the second time to recover the remnant of His people… He will set up a banner for the nations, and will assemble the outcasts of Israel, and gather together the dispersed of Judah from the four corners of the earth.[10]

Note that the first time God brought the Jews back to their land was from Babylon. This event was so significant that two books of the Bible are devoted to it: Ezra and Nehemiah. The Exodus does not represent a return to the land for prior to their relocation to Egypt, they were not established in the land as they were when they went into Babylonian exile. As well, the emphasis of the account is on the exodus itself, hence the name of the book. Isaiah’s prophesy refers to God bringing them back a second time from where they have been dispersed to every nation; the four corners of the earth. This scattering started in AD 70 and was completed in AD 135 at the hands of the Romans.

This is what the sovereign LORD says: I will take the Israelites out of the nations, where they have gone. I will gather them from all around and bring them back into their own land. I will make them one nation in the land, on the mountains of Israel.  There will be one king over all of them. They will never again be two nations, or be divided into two kingdoms.[11]

Israel was divided into two kingdoms after Solomon died. The Northern Kingdom was taken into captivity by the Assyrians in about 740 BC and the Southern Kingdom of Judah was completely taken into exile by the Babylonians in 586 BC.

Again, Jeremiah predicts the return of the Jews from the ends of the earth, to their homeland:

Behold, I will bring them from the north country, and gather them from the ends of the earth, among them the blind and the lame, the woman with child and the one who labors with child, together; A great throng shall return there.[12]

I will bring back the captives of My people Israel; They shall build the waste cities and inhabit them; They shall plant vineyards and drink wine from them; They shall also make gardens and eat fruit from them. I will plant them in their land, And no longer shall they be pulled up from the land I have given them,” Says the LORD your God.[13]

Amazingly, on May 14, 1948, the United Nations declare Israel a sovereign state and gave them a small parcel of land. God’s chosen people began to re-inhabit the land. This was the start of the fulfillment of the prophecies mentioned as well as a fulfillment of Isaiah’s remarkable prophecy concerning Israel: 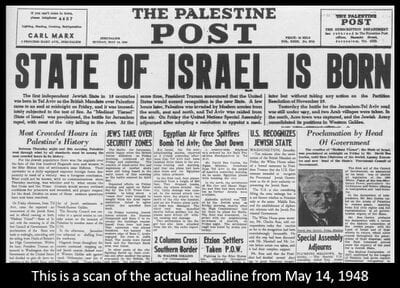 Before she goes into labor, she gives birth; before the pains come upon her, she delivers a son. Who has ever heard of such a thing? Who has ever seen such a thing? Can a country be born in a day or a nation be brought forth in a moment?[14]

Here, Isaiah poses the rhetorical question: “Can a country be born in a day …” Normally, the answer would be no. But when dealing with the supernatural history of Israel, the answer turned out to be yes.

God’s promises to Abraham and to his descendants, made possibly 4,000 years ago, hold true today. His people have remained separate and clearly identifiable; despots have used this fact over the centuries to terrible effect. In defiance of historical precedents, the Jews have not blended in and become absorbed into the countries where they were dispersed. They have remained separate and unique and they now inhabit the land God gave them.

“I think we do not attach sufficient importance to the restoration of the Jews.
We do not think enough about it. But certainly, if there is anything promised in the Bible it is this.
I imagine that you cannot read the Bible without seeing clearly that there is to be an actual restoration of the Children of Israel.”[15]

Of course, Spurgeon wrote this before Israel was declared a state.