Evidence for the earth being at or close to, the centre of the universe

God tells us that after He created the earth, He created light and there was morning and evening. All that is required for morning and evening is a source of light and a rotating earth. After God created vegetation on the earth, then we are told; God created two great lights—the greater light to govern the day and the lesser light to govern the night. He also made the  stars. The focus of the steps of creation is clearly on the earth followed by the creation of the sun and the moon and then the stars. It almost reads that God wrapped the stars around the earth thereby making the earth at the centre of the universe.

What has science revealed about our position in the universe? 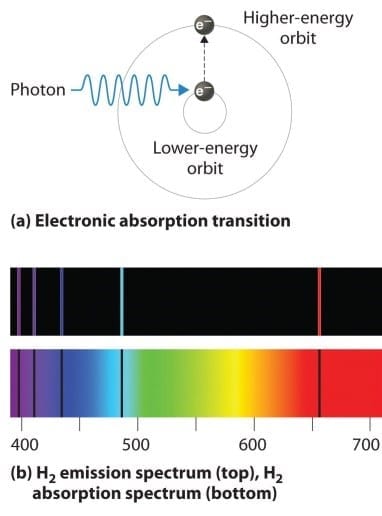 Electrons can occupy different energy levels as they spin around the nucleus of an atom. They can absorb radiation at very discrete wavelengths (energy) and move to higher energy levels. As a result of these transitions, each element can have several absorption lines in light passing through that element and the position of these lines is unique and characteristic for that particular element.

For the hydrogen atom, the main absorption line is at 656 nm. So, if light is broken into its component wavelengths and there is no light at 656 nm, then we can safely assume that the light has passed through hydrogen as shown.

The overall nuclear reaction that is taking place in suns is the combining of two atoms of hydrogen to form one atom of helium; this is known as nuclear fusion. So, any light coming from distant suns or galaxies will always have absorption lines of both hydrogen and helium at least.

Astronomer Edwin Hubble wrote in his book published in 1937:

Although the spectra of the sun and of the nebulae (galaxies) exhibit the same pattern of absorption lines, there is one remarkable difference. The lines in the nebular spectra, in general, are not in their normal positions; they are displaced towards the red end of the spectrum to positions representing wave-lengths somewhat longer than normal. 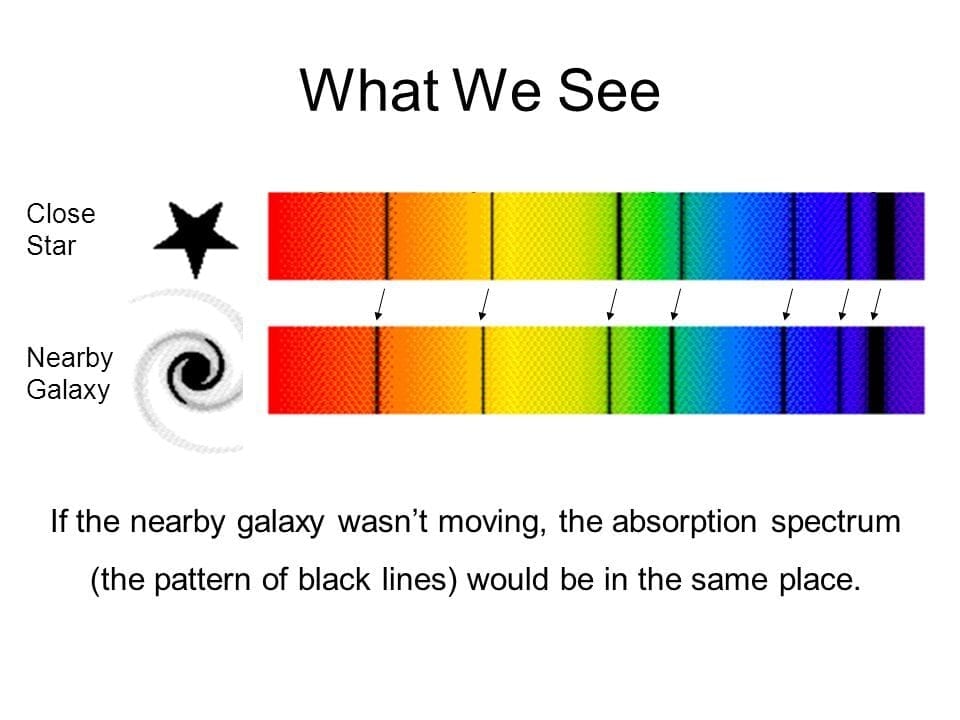 The entire pattern of absorption lines, all details in a spectrum, appear to have been shifted towards the red. These displacements are commonly known as red-shifts. They are characteristic features in the spectra of all nebulae (galaxies) except a few that are in the immediate neighbourhood of our own stellar system. 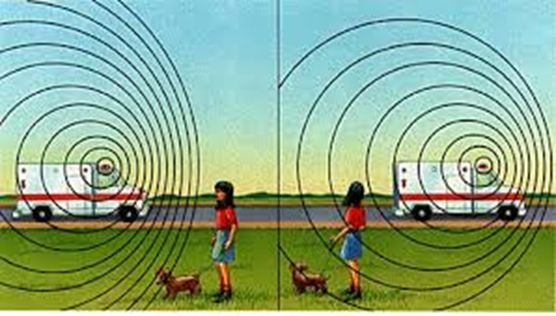 This pattern is shown right.

By 1925 astronomers had measured wavelength shifts of 45 galaxies. Hubble and later astronomers have increased this to 250,000 galaxies and the reason for the shifts was thought to be due to the Doppler Effect which is the change in frequency of emitted sound or light by the moving of the object that is emitting the sound or light. As shown in the sketch of a girl walking her dog, and as an ambulance passes her the frequency of the sound of its siren changes from a higher pitch (shorter wavelength) to a lower pitch (longer wavelength) as shown by the lines in the sketch.

In 1924 Edwin Hubble began to use the 100-inch reflector telescope at the Mount Wilson observatory (USA) and after measuring the red shifts of many galaxies, he noticed a pattern emerging, the more distant galaxies had the greatest red shifts, that is, they were moving faster. In 1929 he published his results in which he stated his now famous Hubble’s Law which says that some cosmic phenomenon causes redshifts to tend to increase in proportion to distance from the earth.[2]

In his 1937 book, Hubble showed that he was horrified at the implication that the Earth could be in a special place since all but the closet galaxies are moving away from us. He wrote:

Such a condition [red shifts] would imply that we occupy a unique position in the universe … But the unwelcome supposition of a favoured location must be avoided at all costs … [and] is intolerable … moreover, it represents a discrepancy with the theory because the theory postulates homogeneity.[3]

People need to be aware that there is a range of models that could explain the observations. … For instance, I can construct you a spherically symmetrical universe with earth at its center, and you cannot disprove it based on observations. … You can only exclude it on philosophical grounds. In my view there is absolutely nothing wrong in that. What I want to bring into the open is the fact that we are using philosophical criteria [beliefs] in choosing our models. A lot of cosmology tries to hide that.[4]

The big dilemma for atheists is that they cannot tolerate the idea that the earth has a very special place in the universe because it is powerful evidence for creation. They are even prepared to pervert science to conceal this fact.

What is moving, the galaxies or the space that contain them? 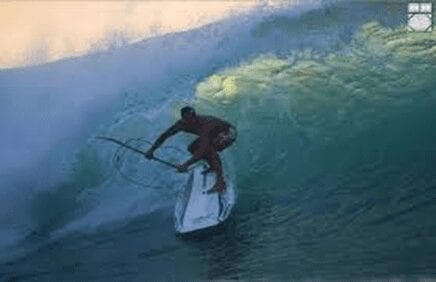 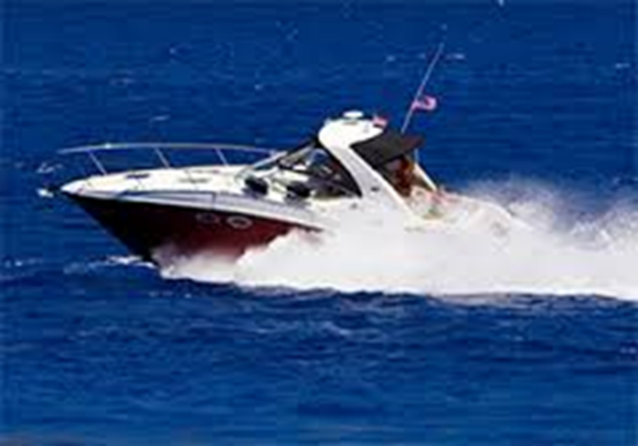 Some Bible believing scientists are of the view, that God did all of the stretching on day four of the creation week. This basically means that the sky Adam looked at is essentially the same as we see.

In the early 1970s William Tifft using the Steward Observatory in Tucson Arizona, noticed these redshifts were in groups with spacings of 0.024%. The spacings are about 72 km/s when it is expressed in terms of Doppler shift and after more studies, he published his results. The same pattern was confirmed when the radio wave region of the electromagnetic spectrum was examined rather than the visible light and in a publication in 1984 he stated;

There is now very firm evidence that the redshift of galaxies is quantized with a primary interval of near 72 km/s.[5]

In 1997 an independent study of 250 galaxy redshifts by William Napier and Bruce Guthrie confirmed Tifft’s basic observations they stated:

— the redshift distribution has been found to be strongly quantized in the galactocentric frame of reference. The phenomenon is easily seen by eye and apparently cannot be ascribed to statistical artefacts, selection procedures or flawed reduction techniques. Two galactocentric periodicities have so far been detected, ~ 71.5 km s-1 in the Virgo cluster, and ~ 37.5 km s-1 for all other spiral galaxies within ~ 2600 km s-1 [roughly 100 million light years]. The formal confidence levels associated with these results are extremely high.[6]

Measurements using the Hubble Telescope show similar clustering out to distances of billions of light years.[7]

The notion of quantised redshifts of galaxies with our galaxy as the point of reference is shown pictorially below as our galaxy being surrounded by consecutive layers of galactic shells. That is, the whole cosmos wraps around us. 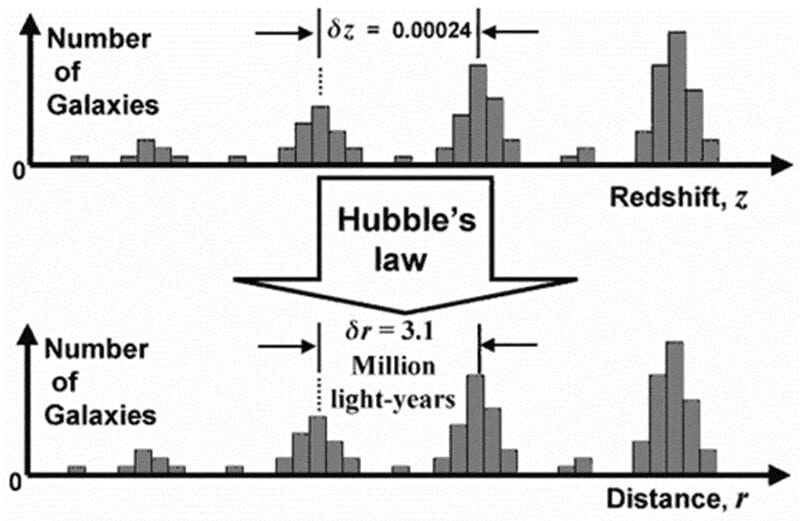 These findings have been in scientific journals now for about 45 years where they have been open to peer review, but the fact that our galaxy (The Milky Way) is at the centre of the universe and all of the other galaxies form shells around it, still stands.

On October 27, 2003, astronomers from the Sloan Digital Sky Survey (SDSS) announced the result of the largest astronomical survey ever undertaken, with more than 200 astronomers at 13 institutions around the world. The SDSS used among other sensitive instruments, a very sensitive digital camera that can take pictures of the night sky in various colours to determine the position and brightness on millions of celestial objects in one quarter of the entire sky.

In the SDSS map, each point shows the position of a galaxy with respect to Earth (Milky way) at the apex. Their distances were determined from their spectra to create a 2 billion light-year-deep 3D map where each galaxy is shown as a single point.[8] The picture clearly shows the whole universe wrapped around us.

The conclusion that our galaxy (containing our earth) is at, or close to, the centre of the universe has been arrived at by observations, measurements and calculations. There are no ‘flights of fantasy’ here like the notion of multi-universes or even an infinite number of universes or unobservable and undetectable ‘fudge factors’ like dark matter and dark energy.

This is powerful evidence for creation by a Supernatural Being and consistent with that Being, being the God of the Bible.

Acknowledgement: A lot of this information has come from Creation Ministries International, found at creation.com.