The Miracle of a Baby’s First Breath

When a baby is in its mother’s womb, all of its needs are catered for. Its blood is oxygenated and its waste product, carbon dioxide is removed by way of the placenta. Its nutrient requirements are provided and its waste is removed via the umbilical cord. As well, the umbilical cord acts as a barrier to the entering any substances that may harm the baby. While in the womb, it has no need for lungs to oxygenate its blood, a liver to remove toxic substances by making them water soluble and kidneys to excrete them. Neither has it need for its immune system, its digestive system with its metres of intestines, gall bladder to breakdown digested fats and spleen to clean the blood. However, these organs do have a small blood flow to allow them to grow and mature but not to operate, so that they are fully functional when the baby takes its first breath.

The human heart has four chambers; the left and right atria and the left and right ventricles.  The atria are receiving chambers and pump blood into the ventricles, which in turn pump it through the body. As can be seen from the diagrams, the left-hand side chambers pump oxygenated blood (red) through the body and it is returned with its oxygen expended and replaced by carbon dioxide (blue). The right-hand side of the heart pumps this oxygen depleted blood to the lungs for the carbon dioxide to be replaced by oxygen. 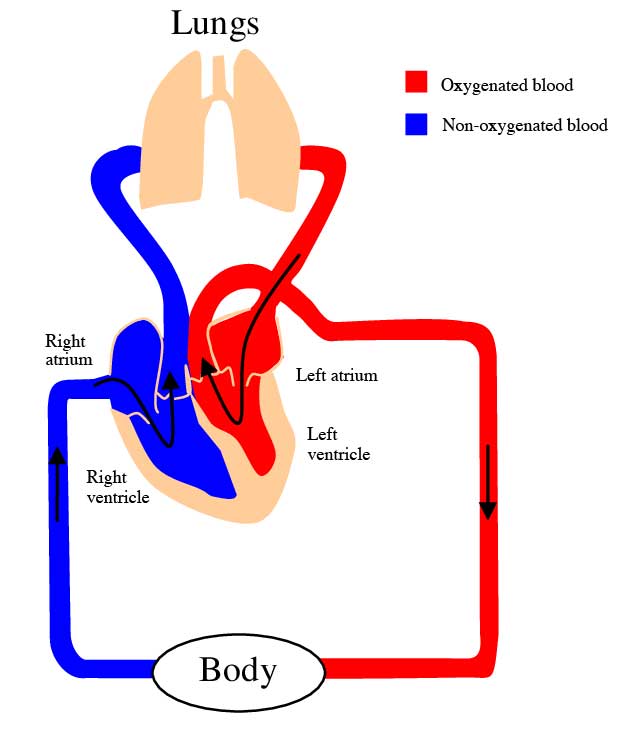 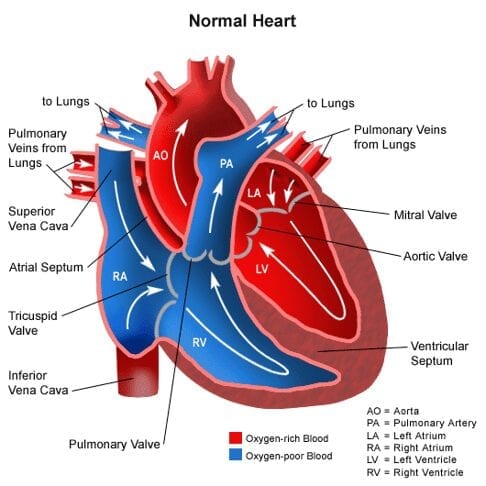 The circulation of blood in an infant is completely different from when the baby is born, for the reasons described above, as shown in the diagram below. Oxygenated blood comes from the placenta to the liver via the umbilical vein after oxygen from the mother’s blood has been exchanged with the waste product of metabolism,[1] carbon dioxide. This process happens in the placenta by way of gas transfusion through extremely fine membranes without the two bloods ever mixing. At the liver, most of the blood is shunted (ductus venosus) away from the non-functioning, but still growing liver to the heart via the inferior vena cava to the right atrium, as shown. Enabling oxygenated blood (red) to be pumped throughout the baby’s body by way of the left ventricle, there is an opening (sometimes called a shunt) between the right and left atriums called the foramen ovale (circled). Otherwise, blood entering the right atrium would go to the right ventricle from where it would be pumped to the lungs.

There is a third temporary shunt (opening) between the pulmonary and the aorta that allows blood to flow from the pulmonary artery into the aorta, which carries it to the placenta for oxygenation. This opening is called the ductus arteriosus, as shown. 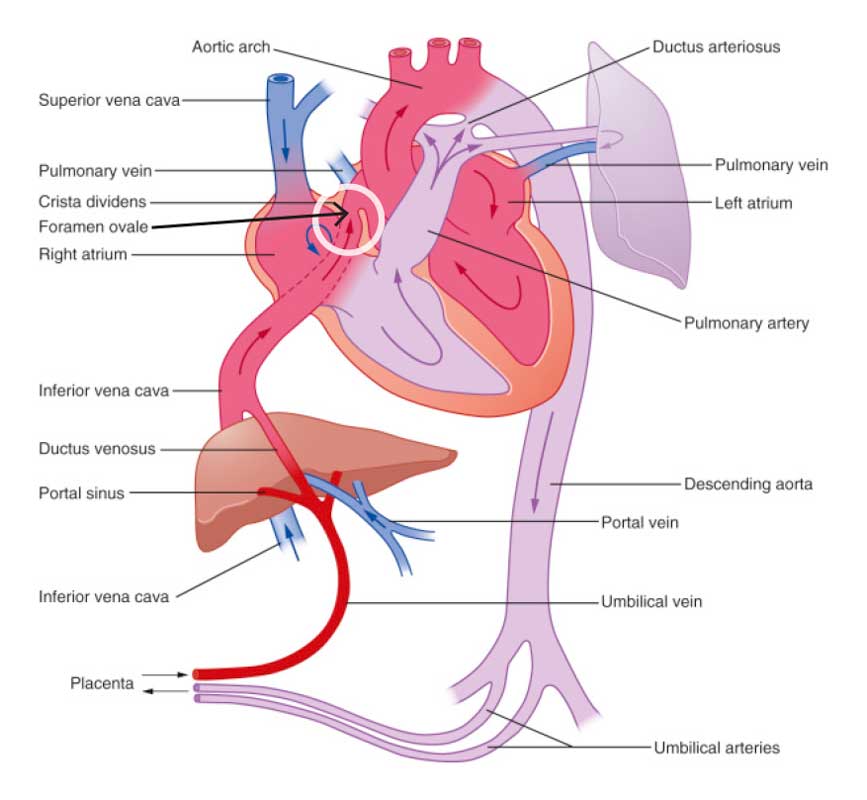 The prenatal infant’s lungs are full of fluid which prevents blood entering due to the pressure it exerts.

At birth, a dramatic change in the circulatory pattern occurs. The fluid in the infant’s lungs is discharged thereby allowing its lungs to inflate as the baby takes its first breath. This also lowers the resistance in the lung arteries and blood flows into the lungs from the right ventricle. At the same time, an increase in blood flow into and out of the lungs increases the pressure in the left atrium and decreases the pressure in the right atrium. This causes the flap (called septum primum) in the foramen ovale to close by way of a push pull effect. And in doing so, it separates the two atria and no longer can blood flow from the right atrium into the left atrium. Note in rare occasions this flap does not close completely and the condition of a “hole in the heart” occurs.

Also, within a day or two of birth, the ductus arteriosus closes off, preventing blood flowing from the aorta to the pulmonary artery.[2]

The process of drying a baby after he/she is born, stimulates the baby to cry and the more vigorous use of its lungs. The colour of the baby changes from ashen, to a healthy skin tone. A miracle has just occurred.

All of the physical and physiological changes that take place when a baby takes its first breath can only point to a master designer: The Master Designer.

Of course, all of this demolishes evolution as an explanation of how everything came about. Why would a growing fetus develop lungs, spleen, liver, kidneys, its complete gastrointestinal tract, gall bladder etc if they are not required and would only be needed at some future time which is when the baby is born?

Let us marvel at what our great God has done and give Him all of the praise and glory.

[1] The chemical processes that occur within a living organism in order to maintain life. [2] If the ductus arteriosus remains open heart failure may occur.