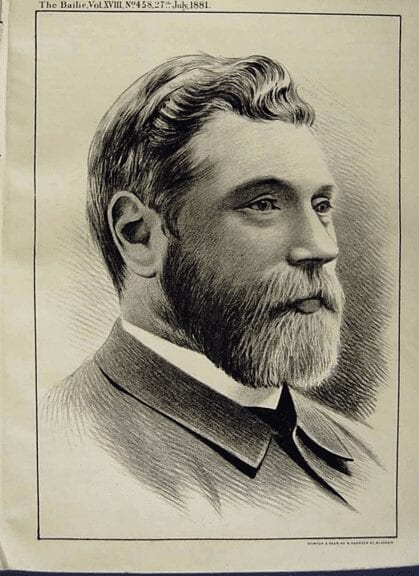 George Matheson was the eldest of eight children born to George and Jane Matheson on March 27, 1842. He was educated at Glasgow Academy and the University of Glasgow, where he graduated first in classics, logic and philosophy. In his twentieth year he became totally blind, but he held to his resolve to enter the ministry, and gave himself to theological and historical study.

After graduation, he commenced his ministerial service as an assistant pastor in 1866. His first ministry began in 1868 at Innellan, on the Argyll coast. He stayed 18 years and it was here that he earned his reputation as an outstanding preacher.

In 1886, he moved to Edinburgh, where he became minister of St. Bernard’s Parish Church in Stockbridge for 13 years.

In 1890 he was elected a fellow of the Royal Society of Edinburgh and the University of Aberdeen gave him its honorary Doctor of Law. And in 1899 he was appointed Gifford lecturer by that university, but declined on grounds of health. He died suddenly of a stroke, on August 28, 1906, at Avenell House in North Berwick. He is buried in the Glasgow Necropolis with his parents.

During his studies for the ministry, Matheson learnt that he was losing his eyesight. His fiance’ concerned about the challenges of caring for a blind husband the rest of her life, called off the engagement and broke George’s heart. His eldest sister took her dejected brother into her home and assisted him with the completion of his studies for ordination. She read the Bible to him, transcribed his dictated sermons, assisted him in the memorisation of his weekly pulpit message and listened reverently as one of his congregants during the delivery of his Sunday sermons.

In time his sister was married leaving Matheson bereft of care. Although he did not begrudge her joys of living her own life, he felt undoubtedly very much alone in this world. On the night of her wedding, Matheson began to meditate on the unfailing love of God for him. He sat down to record his meditations.[1]

Years later he recalled the pain of that night as he told how it was on that occasion that he penned his most famous hymn: O love that wilt not let me go.

My hymn was composed in the manse of Innellan on the evening of the 6th of June, 1882, when I was 40 years of age. I was alone in the manse at that time. It was the night of my sister’s marriage, and the rest of the family were staying overnight in Glasgow. Something happened to me, which was known only to myself, and which caused me the most severe mental suffering.

The hymn was the fruit of that suffering. It was the quickest bit of work I ever did in my life. I had the impression of having it dictated to me by some inward voice rather than of working it out myself. I am quite sure that the whole work was completed in five minutes, and equally sure that it never received at my hands any retouching or correction.

I have no natural gift of rhythm. All the other verses I have ever written are manufactured articles; this came like a dayspring from on high.

It was through the deep trials of illness and desertion that George Matheson had come to place all his trust and hope in the love of God in Jesus Christ as his Saviour.[2] 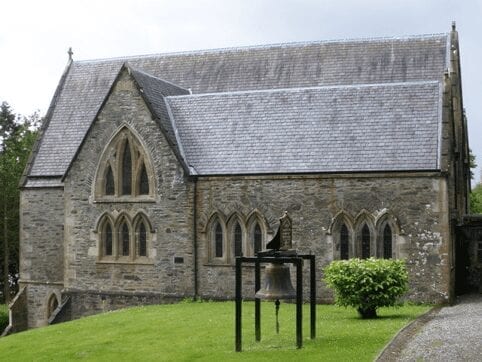 Being blind, Matheson had to memorise his whole sermon. He preached well and before long his preaching ability became known throughout Scotland. People would spend their holidays in Innellan (his church is pictured) so that they could hear him. At times his congregation would swell to 2,000 and Queen Victoria invited “Matheson of Innellan” as he became known, to Balmoral Castle to preach. She was so taken by his message on: The patience of Job, taken from James 1:2, that she requested a copy and had it printed so that others may have the benefit of it as well.[3]

George Matheson had to confront a difficult dilemma that many Christians face; God is love and believers are precious to Him (Isaiah 49:16). Nothing happens without Him allowing it to happen (Psalm 24:1, Lamentations 3:37). Why has God allowed me to be afflicted so? I know of a lady who lost her two children while she was serving on the mission field. Horatio Spafford lost his four-year-old son to scarlet fever and in the same year his investment in real estate was reduced to ashes in the 1871 Great Fire of Chicago. Two years later, his four daughters were drowned while sailing with their mother to England to hear Moody preach. Carolina Sandell was with her father, a Lutheran pastor, crossing a Swedish lake when suddenly the ship lurched, and before her eyes, her father was thrown overboard and drowned.

Each of these people learnt that being a Christian does not protect them from tragedy; if it did people would become Christians for the wrong reason. God can use such enormous loss to deepen/strengthen their faith and how they deal with it, as an encouragement for others.

At a particular low point, George Matheson wrote his deep introspective hymn; O love that wilt not let me go. He did not let his loss of sight deter him from using his preaching and writing abilities to serve God.

In deep despair, Horatio Spafford wrote It is well with my soul, which makes the point that one can lose everything that this world can provide, but not his eternal salvation. Listen to his hymn here: https://www.youtube.com/watch?v=FexGqNDBK3g

Carolina Sandell expressed what she learnt from her great loss. The first four lines of her hymn: Day by day and with each passing moment, sets the tone and the rest expresses her understanding of how God provides for His children.

Day by day and with each passing moment

Strength I find to meet my trials here;

Trusting in my Father’s wise bestowment,

I’ve no cause for worry or for fear.

The whole hymn can be heard here: https://www.youtube.com/watch?v=AzrhqjzQCi4