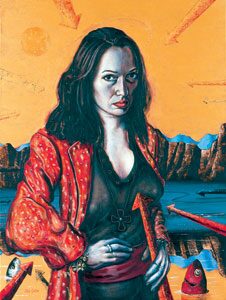 The label “prostitute” has stuck fast for centuries, ever since Pope Gregory I (540-604) first pronounced her a “sinful woman” in the year 591. He did this after assuming that she was the penitent woman who washed Jesus’ feet with her tears, dried them with her hair and anointed them with a fragrant oil.[1] Also, he claimed that she was the same woman who was caught in the act of adultery who Jesus saved from stoning.[2] And further, she was also Mary from Bethany who anointed Jesus’ feet with the expensive and fragrant oil, nard.[3] There is no scriptural support for this fusing of characters, but the label as a repentant prostitute has persisted. Mary Magdalene has been depicted this way in the relatively recent blockbuster films Jesus Christ Superstar (1973), The Last Temptation of Christ (1988), and The Passion of the Christ (2004).

On the positive side, although continuing with the label, the successful Magdalene community, begun in 1997 by Becca Stevens in Nashville, Tennessee, with the aim to help women recover from lives of drugs, prostitution, and abuse.[4]

The Second Vatican Council removed Mary’s prostitute label in 1969 after much debate and biblical evidence that there was more than one Mary and that Mary of Magdalene and the unnamed sinner were two different figures.

The wife of Jesus?

The non-canonical Gospel of Philip, dated around the 3rd century and which was rediscovered in the 1940s states:

Andrew Lloyd Webber’s musical Jesus Christ Superstar focused on the fractured relationship between Jesus and Judas and portrayed Mary Magdalene as “the prostitute with a heart of gold,” With this theme, Webber delivered one of its most popular songs, I Don’t How To Love Him. In it, Mary is caretaker to an overwhelmed Jesus, and, confused by her love for him, she wonders why, as someone who has “had so many men before,” a reference to her previous life as a prostitute, her feelings now make her “seem like someone else.”

Both the Da Vinci Code and Jesus Christ Superstar are pure fiction and in fact, blasphemous. 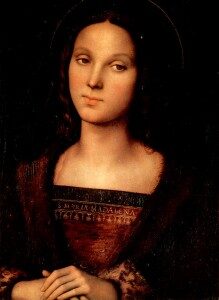 Mary is referred to as Mary Magdalene because she came from the poor and smelly fishing village of Magdala, which was located on the west bank of the Sea of Galilee about 5 km north of Tiberias. This epitaph served to identify her from the many other Marys mentioned in the New Testament.

Mary Magdalene is first cited as being one of several women who travelled with Jesus and His disciples as they went about from one town to another. The women had been cured of evil spirits and diseases and Luke tells us that Mary Magdalene had seven demons taken from her.[6] They were most likely grateful to Jesus as these women, were helping to support them out of their own means. This life of service brought Mary into intimate companionship with Salome, Mary the mother of James and the other women associated with Jesus’ ministry, as they travelled together. Also, they were standing together at the cross during Jesus’ final hours.[7] They followed Joseph of Arimathea and Nicodemus to Joseph’s tomb and watched as they placed Jesus’ body in the tomb and closed it with a large stone.[8] Luke makes the further comment: Then they went home and prepared spices and perfumes. But they rested on the sabbath in obedience to the commandment.

The next morning (Sunday) at dawn, the women came to the tomb to anoint the body of Jesus.[9] It appears that Mary Magdalene had been to the tomb already and found it empty and had seen the angels.[10] She then proceeded in tears, to tell Peter and John, that the tomb was empty. Peter and John ran to the tomb and Mary followed. After seeing that the tomb was empty, they left but Mary stayed.[11] It is then that the risen Christ appears to her and only after He calls her by her name does she recognise Him. He warns her not to hold on to Him.[12] This sequence of events is consistent with the gospels’ narrative and is proposed by Unger’s Bible Dictionary.[13]

Notice, Mary’s response to Jesus’ calling her by name was Rabboni (teacher) and this shows that their relationship was teacher to student or even master to servant, because Mary refers to Jesus as; my Lord when questioned by the angels at the tomb.[14] Further, Matthew tells us that when Jesus appeared to them at the tomb, the women, including Mary Magdalene clasped his feet and worshipped him. Again, their actions demonstrated a master, servant relationship. There is a complete absence of any romantic attachment, but rather evidence for total reverence. Jesus was not physically attractive as modern film makers present Him. Isaiah[15] tells us: He had no beauty or majesty to attract us to him, nothing in his appearance that we should desire him. Mary would have been drawn to Jesus simply because of the power of His being, that is, God in flesh. The same power that caused Peter and Andrew to leave their fishing business and follow Him.[16] As did Matthew leave his lucrative job of tax collection.[17]

Mary Magdalene is mentioned 13 times in the New Testament, making her the second most mentioned woman, after the Virgin Mary (19 times). Most references are found in the crucifixion and empty tomb narratives, where she is portrayed as a loyal disciple at the foot of the cross and as the first witness to the resurrection.

Christ’s resurrection, along with His virgin birth are the most significant two events in world history. His virgin birth commenced the process of reconciling mankind with God. His resurrection was evidence that this reconciliation had been completed. Notice, the women including Mary the mother of James, Salome and Joanna along with Peter and John were all at the empty tomb, but it was Mary Magdalene who Jesus chose to reveal His risen self to and this bestowed on her a very high honour. Our Lord’s choice reflected Mary’s character which Jesus knew thoroughly.

The second picture of Mary Magdalene is by Pietro Perugino about 1500.