Samson Destroys the Temple of Dagon

We are told of how Sampson destroyed the Philistine Temple of Dagon in Judges 16:23-30.

23 Now the rulers of the Philistines assembled to offer a great sacrifice to Dagon their god and to celebrate, saying, “Our god has delivered Samson, our enemy, into our hands.”

24 When the people saw him, they praised their god, saying,

“Our god has delivered our enemy
into our hands,
the one who laid waste our land
and multiplied our slain.”

25 While they were in high spirits, they shouted, “Bring out Samson to entertain us.” So they called Samson out of the prison, and he performed for them. 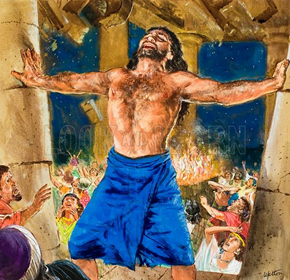 When they stood him among the pillars, 26 Samson said to the servant who held his hand, “Put me where I can feel the pillars that support the temple, so that I may lean against them.” 27 Now the temple was crowded with men and women; all the rulers of the Philistines were there, and on the roof were about three thousand men and women watching Samson perform. 28 Then Samson prayed to the Lord, “Sovereign Lord, remember me. Please, God, strengthen me just once more, and let me with one blow get revenge on the Philistines for my two eyes.” 29 Then Samson reached toward the two central pillars on which the temple stood. Bracing himself against them, his right hand on the one and his left hand on the other, 30 Samson said, “Let me die with the Philistines!” Then he pushed with all his might, and down came the temple on the rulers and all the people in it. Thus he killed many more when he died than while he lived.

Could one man bring down an entire temple with three thousand people sitting on its roof by pushing over two very large pillars? And in this one act, destroy the entire Philistine leadership thereby giving rest to Israel from Philistine attacks? Or is it just a story, an allegory, in order to make a point like the mythical Superman of comic strips using his super powers for good?

Among many is Gary Greenberg who is a member of several scholarly organizations, including the Society of Biblical Literature, the Archaeological Institute of America, the Historical Society, and the American Research Center; he confidently asserts that most of the Hebrew Bible is reworked versions of Egyptian mythology as are most of historical Patriarchs. In one of his books, 101 Myths of the Bible, he declares that the whole Sampson account is mythology with Sampson being a local deity.[1]

John L. McKenzie, who was Professor of Theology, DePaul University, Chicago, 1970–78, sees the stories of Samson’s immense power as a highly exaggerated popular tale and writes:

…the historical quality of heroic tales is always low. This is easy to see in Samson. A palace or temple which could support several thousand people on its roof supported by two central pillars separated by an arm’s length never existed.[2]

The ruins of the Philistine temple of Dagon at Gaza mentioned in Judges 16, lie under the city of Tell Aviv and accordingly have not been excavated, but two other similar temples of the same period, have been.

The first Temple of Dagon excavation 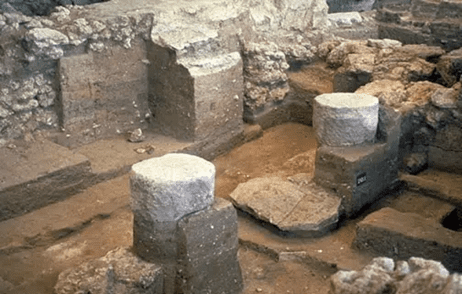 Excavations of Tell Qasile began in 1948, under Prof. Benjamin Mazar, continued through to the early 1990s. The dig revealed the remains of an ancient port city built by the Philistines in the 12th century BC. Further excavations by Amihar Mazar in the early 1970s uncovered three temples built one on top of the other. These were the first Philistine temples to be discovered. The latest, from the 11th century BC, approximately the time of Samson, measured 26 feet (7.8 m) by 48 feet (14.6 m). The temples were built for the worship of their god Dagon.

The unique feature of its design was that it had two large pillars that supported its roof just as did the temple of Dagon described in Judges 16.[3] They were made of cedar wood approximately 1 foot (30 cm) in diameter and rested on stone bases set in the floor as can be seen in the image. It would have been possible to dislodge the central pillars in the Tell Qasile temple, since they were held in place on the stone base only by the weight of the roof. 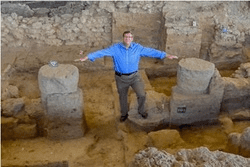 A large man with his arms extended could have spanned the 7 foot (2.1 m) distance between the two pillars. This has been demonstrated by David Cloud as seen in the picture.[4]

Dr Bryant G Wood has published a thorough examination of the facts surrounding the Samson account, including the Hebrew used and the population at the place and time and states that the account could have only come from an eyewitness as King David had put an end to Philistine power in the late 11th century BC.[5] So presumably, their temples would have been destroyed.

The second Temple of Dagon excavation 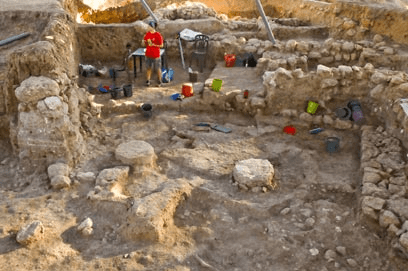 Professor Aren Maeir, of Bar-Ilan’s Martin (Szusz) Department of Land of Israel Studies and Archaeology, announced that he and his international team have discovered a Philistine Temple, including several ritual items, dating back to the Iron Age (10th century BC). He made the following statement:

Interestingly, the architectural design of this Temple, with its two central pillars, is reminiscent of the architectural image that is described in the well-known Biblical story of Samson and the Philistines, when Samson knocks down the temple by standing between the pillars and pushing them down. Perhaps this indicates that the story of Samson reflects a type of temple that was in use in Philistia at the time. Professor Maeir has directed the excavations at Tell es-Safi/Gath for 13 years.[6]

Although the remains of the original Temple of Dagon mentioned in the Judges account, lie under the modern city of Tell Aviv, two other such temples have been discovered and excavated. Admittedly, both the Tell Qasile and the Tell es-Safi/Gath temples would have been much smaller because they could not have supported three thousand people on their roofs’, they still reveal the same unique construction technique of the roof being supported by two large columns approximately two metres apart. The time of the temples being used have been identified as being contemporary with the period of Judges. And as Dr Wood states, the Hebrew used to describe the account is consistent with that of an eyewitness.

Once these two supporting pillars were pushed over, the rest of the temple would have collapsed like standing dominos do.

Again, Bible critics have been shown to be wrong and the rule of thumb: Bible critics are always wrong, still stands as strong as ever.