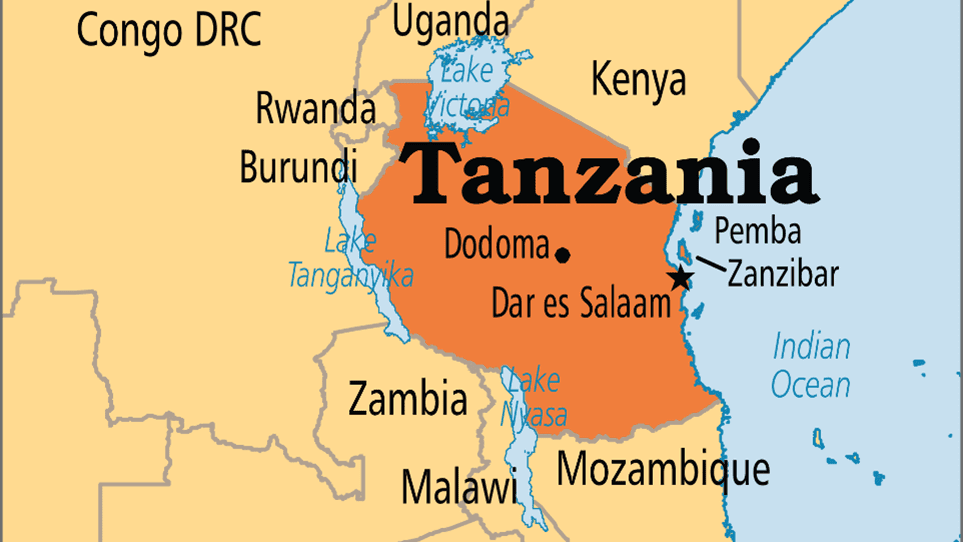 Tanzania is situated on the east coast of Africa and it dates from 1964, when it was formed out of the union of the much larger mainland territory of Tanganyika and the coastal archipelago of Zanzibar. The former, was a colony and part of German East Africa from the 1880s to 1919 when, under the League of Nations, it became a British mandate. It served as a British military outpost during World War II, providing financial help, munitions, and soldiers. In 1947, Tanganyika became a United Nations Trust Territory under British administration, a status it kept until its independence in 1961.

On December 9, 1962, Tanganyika adopted a republican constitution, and Julius Nyerere became executive president of the country. The next month, he announced that in the interest of national unity and economic development, TANU[1] had decided that Tanganyika would now be a one-party state. In 1967 after its union with Zanzibar in 1964, nationalisations transformed the government into the largest employer in the country. It was involved in everything from retailing to import-export trade, even banking. This created an environment ripe for corruption. In October 1985, Nyerere handed over power to Ali Hassan Mwinyl and Benjamin William Mkapa was sworn in as the new president of Tanzania on 23rd of November 1995. In December 2005, Jakaya Mrisho Kikwete was elected the 4th president for a five-year term. After he had ruled for two terms (10 years) where corruption was endemic and accompanied by civil strife, Kikwete stepped down and in October 2015 John Magufuli, a dedicated catholic, began his term as president winning accolades for his frugal tendencies, for a crackdown on corruption, his clean record and, later, for his focus on infrastructure projects. 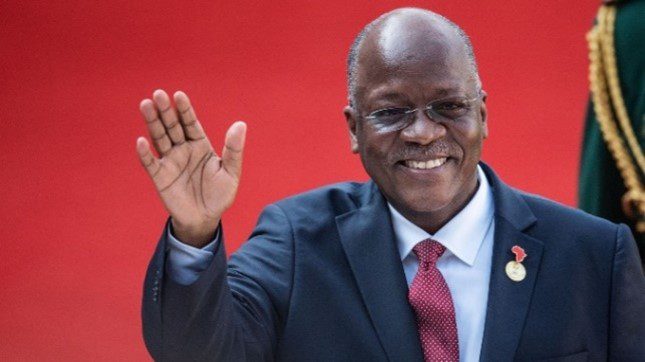 The following is taken from Wikipedia:[2] In 1995, Magufuli was appointed deputy minister for works, transport and communication. During this twenty-year period, he kept a corruption free record, a rare feat given the portfolios he was responsible for and for the fact that Tanzania was plagued with corruption and scandals.[3] After being elected president in 2015, Magufuli immediately began to impose measures to curb government spending, such as barring unnecessary foreign travel by government officials, using cheaper vehicles for transport and cheaper board rooms for meetings respectively, shrinking the delegation for a tour of the Commonwealth from 50 people to 4 and his cabinet from 30 ministers to 19 to cut costs. He reduced his own salary from US $15,000 to US $4,000 per month.

In July 2020, Magufuli was re-elected for a second five-year term. 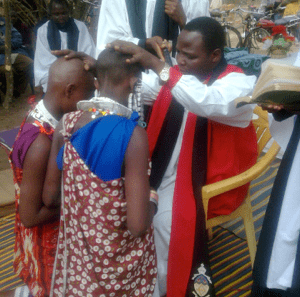 As cases of Corona virus started to increase in 2020 to 94 with four deaths, Magufuli called for three days of national prayer with the words; Tanzanian compatriots, because of the pandemic, I urge you to use these three days, from April 17 to April 19, (Friday, Saturday and Sunday) to pray God for His protection and healing. At another time, he said: We need to put God first in fighting against this dangerous disease, but at the same time take health precautions to protect ourselves. He stressed the importance of washing regularly and social distancing. He closed schools and suspended social gatherings. However, vaccines were not imported into Tanzania. Churches and mosques could remain open. Travel restrictions were not imposed, and face masks were not mandated.

Christians responded to Magufuli’s call with both Anglican and Catholics urging their members to pray. Services were conducted on the three days of prayer. Fifty percent of the country’s 60 million people are Christian and 30% Muslim. 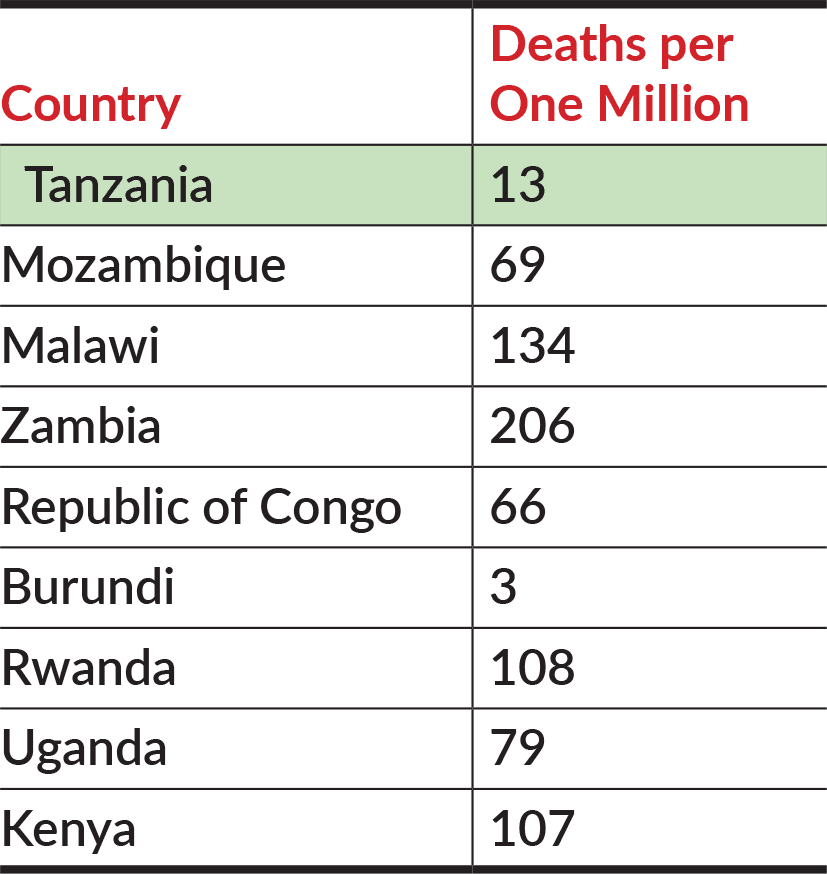 In general, there has been less Covid deaths per head of population in Africa than in other countries. This is thought to be due mainly, to a younger population and a favourable climate. Wikipedia[4] has published a listing of 210 countries in order of Covid-19 deaths per million people in the order of greatest to least. The data is a compilation up to August 4, 2022. Tanzania, with just 13 deaths per one million people, is listed as country 202. This means that of the 210 countries, Tanzania had less deaths per one million population than did 201 other countries.

A more accurate comparison is to compare Tanzania’s deaths with those countries that border it. Tanzania shares a border with eight other countries as can be seen in the map above. 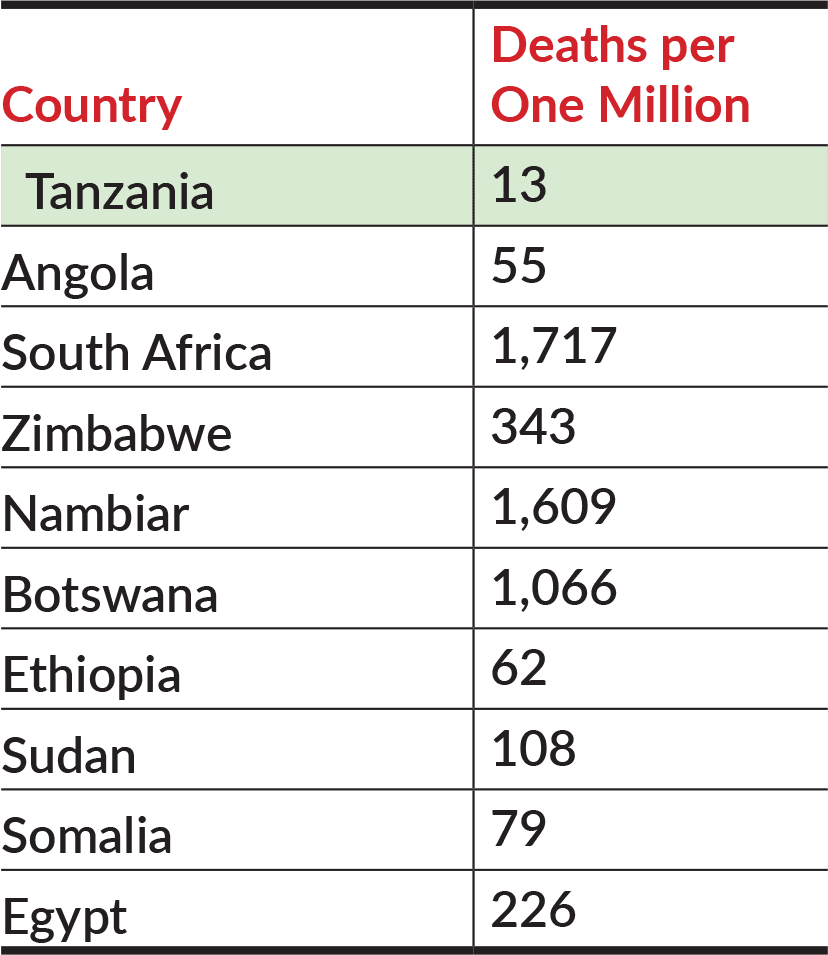 How realistic is the figure for Burundi is an open question? It has suffered bouts of ethnic cleansing and ultimately two civil wars and genocides, during the 1970s and again in the 1990s which resulted in hundreds of thousands of deaths, leaving the economy undeveloped and the population as one of the world’s poorest.

A further comparison is made in the second table, by comparing deaths per million of Tanzania with deaths in other African countries. South Africa has a similar population to Tanzania and has suffered 1,717 deaths per one million people.

There is no doubt that Tanzania had far less deaths from Corona virus than its neighbours and other African countries. Its borders remained open and infected people could travel in and out of Tanzania, these people could have brought the virus with them and then died in Tanzania.

Tanzanians have benefited greatly from having a bold God-fearing president who instituted three National Days of Prayer and urged his people to seek the Almighty for protection. It has been a great loss to other countries for not having done the same. If they had of, maybe millions of lives would have been saved. Britain certainly benefited from its National Day of Prayer. See https://www.adefenceofthebible.com/2016/02/02/the-miracle-of-dunkirk.