Previous Post
Was Jesus totally naked when He was crucified?
Next Post
How did everything come into existence?

If you were to Goggle Darwin’s Theory of Evolution and then click on images, what is shown is the ubiquitous image of monkeys transitioning to a man as shown below. 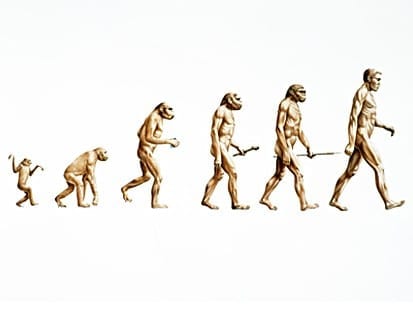 Bernard Wood, Professor of Human Origins at George Washington University, and an evolutionist, wrote the following:

There is a popular image of human evolution that you’ll find all over the place, from the backs of cereal packets to advertisements for expensive scientific equipment. On the left of the picture there’s an ape—stocky, jutting jaw, hunched in the knuckle-walking position. On the right, a man—graceful, high forehead, striding purposefully into the future. Between the two is a succession of figures that become ever more like humans, as the shoulders start to pull back, the torso slims down, the arms retract, the legs extend, the cranium expands and the chin recedes. Our progress from ape to human looks so smooth, so tidy. It’s such a beguiling image that even the experts are loath to let it go. But it is an illusion.[1]

The reason why this picture is displayed, is the fact that an artist makes it is easy to believe, but this is not what evolution is about. Darwin proposed that all life came from some basic primordial form which in modern evolutionary thinking is a single cell species like microscopically small bacteria. I have had a graphic artist construct poster of what  Darwin actually proposed, but you will never see it displayed anywhere because people will reject it because it ridiculous to say that microscopically small bacteria transformed themselves into you and me. See below 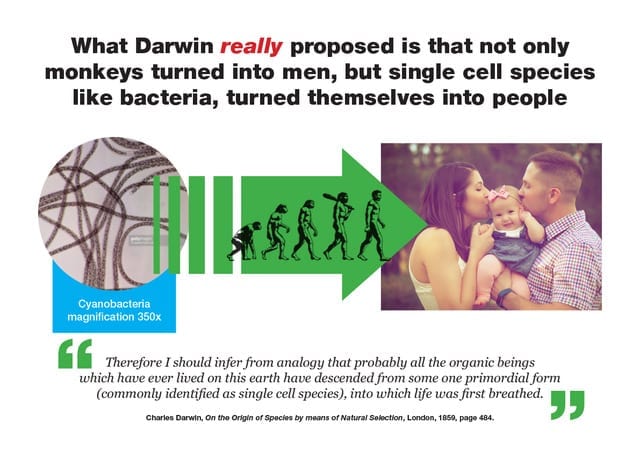 Evolutionists propose that chemicals joined themselves together in a very precise way to form an incomprehensibly complex single cell species. In doing so, the cell’s DNA increased from about 600,000 links, their chemical name is nucleotides of which there are four types, to over 3 billion of humans. Evolutionists can not give a mechanism for this enormous increase. It is certainly not through mutations or natural selection which only reduces information in genes. They simply believe it by faith.

I have written six blogs on why evolution is impossible from a scientific point of view. To read them, click on “View all articles in our blog”

So friends, when you see the monkey to man drawing, simply ask where the monkey came from.